In a move that city leaders argue will help diversify the pool of candidates for public office, the San Luis Obispo City Council voted on Feb. 4 to give their positions significant pay increases starting next year. 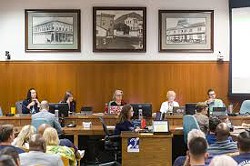 They mark the largest raises approved by the council in at least 12 years.

In voting for the raises, the council followed the recommendations of an appointed compensation committee, which met four times to deliberate the new salaries. The committee analyzed the council's hours worked—20 to 30 hours per week—and what other cities are paying their councils (ranging from $600 to $800 in Paso Robles to $3,700 to $4,626 in Santa Barbara).

Members of the committee said they believe the raises will enable and encourage a more diverse set of citizens to run for local office.

"Failing to compensate someone fairly for their time only leads to reducing the opportunity of who can afford to run for council," committee member Garrett Otto wrote in a letter. "This is the reason that a majority of city councils tend to be mostly retired and independently wealthy individuals."

Another member, Audrey Bigelow, applauded the current council for its work and said wage increases were important to continue attracting new candidates like them.

"I want the great work of this council to continue on," Bigelow wrote, "and the way to ensure that happens is by giving more people the opportunity to run. Increased compensation is our only mechanism for changing the pool of potential candidates to continue to truly represent the constituents of this city."

Some residents and former city leaders stood opposed to the new wages. While those in support argued that their fiscal impact would be negligible, constituting less than 1 percent of the city budget, opponents questioned the optics of giving raises at a time when SLO faces budgetary challenges from pension debt.

"When the budget problems are fixed, then it will be time to consider raises," wrote one resident, Mike Berger.

A former mayor, Peg Pinard, called the raises "arrogant" and "self-serving" in a letter that alluded to the work of past council members.

"It would be extremely presumptuous for someone to say they are entitled to such an excessively huge salary increase and that they are entitled to be treated differently than all the hard-working people who came before them," Pinard wrote. "The nature of the job has not changed."

In a letter to community members she sent prior to the meeting on Feb. 2, Mayor Heidi Harmon called the raises a "very fair, measured recommendation that sets up a just and equitable system for future leaders who enter elected positions in the city of SLO." She noted that the raises bring the council's annual take-home salaries—$23,880 for council members and $30,996 for the mayor—closer to the city's median household income of $47,777.

"We need thoughtful, creative, bold people from all walks [of] life to step into leadership, run for office, and lead our communities forward toward progress," Harmon wrote. "One of those greatest limiting factors to this in our community is compensation for these elected positions."