San Luis Obispo is poised to get a new police station, rebranded as a public safety center, after City Council members stated their unanimous support on Nov. 2 for constructing a new facility over retrofitting the current one.

How big that new center will be—and what features it will include—are still up for debate.

"I hope that as the designs and program come together, it downsizes, honestly," Councilmember Andy Pease said about initial plans for a $52 million, 37,768-square-foot station. "It feels very big. It does feel like a big investment of funds." 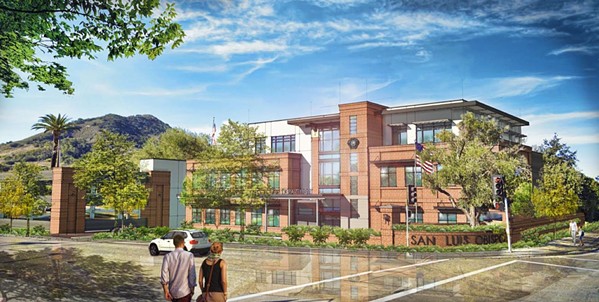 City officials presented their preliminary plans on Nov. 2 for the proposed public safety center, which includes a new police station, a city emergency operations center, and a community meeting space. Expected to replace the current station at 1042 Walnut St., the conceptual new building is more than twice the size of the existing one.

City Manager Derek Johnson said that discussions about the need for a new station in SLO date back as early as the 1980s. Built in 1969, the current facility is "functionally and structurally obsolete and no longer adequately meets the space and operational needs of the Police Department," according to a SLO staff report.

Johnson started the Nov. 2 discussion by acknowledging that public sentiment on policing has evolved in recent years, especially since last year's nationwide protests against police brutality. But he emphasized that the current station is too small, seismically unsafe, not Americans with Disability Act (ADA) compliant, and plagued by a variety of other issues.

"We were holding kind of two realities," Johnson said. "One, that we had an aging building that was clearly in need of replacement and had long outlived its life and was too small to even meet current needs. At the same time, how do we plan for a facility while we're currently in a process with our current police chief ... to reimagine policing in the 21st century? We're trying to walk these two paths at the same time."

Public comments at the meeting voiced opposition to such a large investment in the Police Department. On Nov. 2, the SLO chapter of the Democratic Socialists of America submitted a petition with 151 signatures calling on the City Council to reject the project and invest its funds elsewhere.

Courtney Haile, executive director of R.A.C.E. Matters SLO, signed the petition and told council members that while she opposed a new facility, she would support a less costly retrofit of the current station.

According to the city and its building consultants, a retrofit is not a prudent option. Officials estimate that it would cost $18 million to complete a retrofit, which wouldn't add any square footage to the station.

"Could the building just be retrofitted? The short answer is it just doesn't make financial or practical sense to do so," said Lief McKay of RRM Design Group, a project consultant. "[It would cost $18 million] just to shore up the existing building. And that wouldn't add any new space. That's about a third less than what is needed today."

City Council members focused their discussion on the details and features of a new station, rather than entertaining the option of a retrofit.

Mayor Erica Stewart stated her opposition to the proposed community meeting room at the station, which the city has pitched as a place the public could freely utilize. Stewart said that concept wouldn't land well with residents who have had negative experiences with police.

"This wonderful, nice concept of having people come to the public safety center—there are many people who don't feel comfortable going to a public safety center that may include a police department," Stewart said. "I definitely do not think putting a community room in a space of power gives any sort of success for growing trust going forward."

Pease also expressed lukewarm feelings about the community room, as well as the center's proposed parking structure, which would have 128 spaces.

"It's a lot of money for a lot of space, and it's contrary to some of our climate action goals," Pease said. "Every square foot of this building is a very expensive square foot. And so we just want to make sure we're making the highest and best use [of public money]."

Johnson, the city manager, emphasized that SLO is just in the beginning stages of the planning process. As the project moves forward, the city will conduct more public outreach to gather input about the specific aspects of the center—with the start of construction scheduled for 2025-26. The facility is expected to be debt-financed and paid off using Measure G sales tax revenue, Johnson said.

At future City Council meetings, Johnson said he hopes to hone in on what kinds of police reforms SLO is interested in pursuing, so they can be incorporated into the design of the public safety center. SLO's new police chief, Rick Scott, echoed that hope.

"It is a very exciting time," Scott said at the meeting. "We are in the process of reimagining policing." Δ