The San Luis Obispo City Council voted to spend $761,500 on “beautifying” two downtown blocks. The city had to strip $96,000 out of other city capital projects to meet the rising costs of its sprucing-up efforts. The lowest contractor’s bid for the project came in $174,900 over budget. 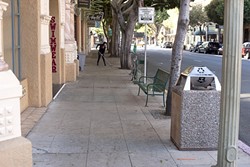 The Nov. 15 debate over the project was contentious and split the council members 3-2. John Ashbaugh, Dan Carpenter, and Mayor Jan Marx voted for the project, while Andrew Carter and Kathy Smith voted against it.

Ashbaugh, a longtime enthusiastic supporter of spending on downtown improvements, said the project will sustain local jobs and “will add to the vitality of the downtown.”

Carter seemed to be fearful of the project’s rapidly increasing costs. The two improved blocks are meant to be a pilot effort that will one day encompass the entire downtown. At around $380,000 per block, Carter said it’s doubtful the city can afford to beautify the entire area.

“Our eyes are bigger than our stomachs,” he said. “We need to figure out something we can afford for the entire downtown.”

Marx and Ashbaugh convinced Carpenter to approve the project by agreeing to not use any more general fund money for the project, which has been in the works for years. In 2010, the council reduced the downtown project to three blocks, but the chosen contractor’s bid came in more than $258,000 over budget.

In an effort to reduce costs, the council shrunk the project in March to only two blocks of Higuera Street, between Morro and Garden streets. This time, the project’s cost is 13 percent more than the city estimated.

Staffers have underestimated the cost of projects before. In July, they told the City Council a plan to charge for Sunday parking would cost $11,000 to implement, but the cost eventually grew to $102,500.

“I’m afraid this is becoming a pattern here,” Smith said after the final vote. “A project comes in over budget, and we take money from other projects to pay for it.”