Most of the building that stretches along Chorro Street between Marsh and Higuera sits vacant, longing for a new tenant.

In recent years, the Higuera Street side of the building was renovated and is now occupied by the Wineman Hotel—joined by a burger joint, a tea house, and a restaurant serving salad and comfort food, among others. Still, the majority of the building that once hosted Copeland’s Sports is empty, hanging on to old green canvas awnings that serve as a reminder of what the building used to be. After Copeland’s came Sports Authority, before the sporting goods chain realized its San Luis Obispo store would be better suited alongside other chains in the strip malls lining Madonna Road. 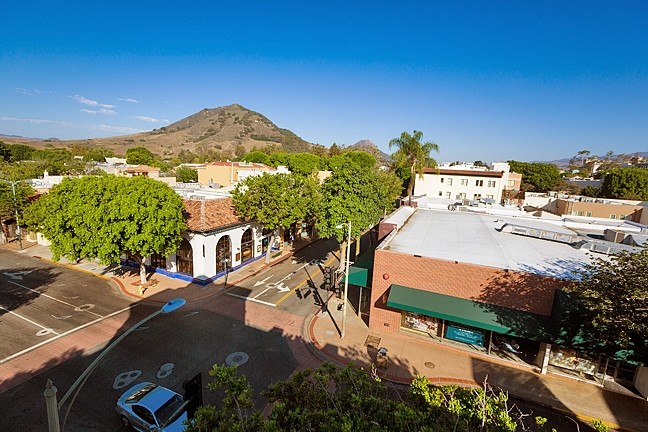 Now, a tenant’s finally ventured out of the emptiness. Josh and Jeremy Pemberton, twin 30-something brothers who own Discovery Ventura—a booming, upscale bowling alley, restaurant and bar, and entertainment venue —want to set up shop in SLO. But first, the Pembertons have to clear a final hurdle—the San Luis Obispo City Council, which will hear the project at its Sept. 15 meeting.

The proposed establishment, Discovery SLO, already passed the Architectural Review Committee and the Planning Commission. The commission approved the project 3-2 on July 22. In the process, commissioners reduced Discovery SLO’s permitted operating hours from 10 a.m. to midnight, instead of until 2 a.m.

But, as many predicted, the Planning Commission’s approval was appealed, and now the project will be heard by the City Council. The project was actually appealed both by the applicant—asking that the operating hours be permitted until 2 a.m.—and the resident group Save Our Downtown, a familiar actor when it comes to permitting new downtown establishments.

Even though Discovery SLO will be designed as a multi-use establishment that offers both family-friendly and nighttime entertainment, James Lopes, one of the appellants for Save Our Downtown, is concerned that when night falls, it will be just another downtown bar.

“This isn’t just a Chuck E. Cheese’s or anything that passes for youth entertainment,” Lopes told New Times. “It’s a large nightclub where you can gather with your homies and hang out after you go to the movies.”

Lopes points to the large number of people that could fill the establishment, and the nightclub-style character of Discovery SLO’s bars and lounges.

Rawson said that the company was particularly interested in having Discovery SLO as a tenant because downtown currently has limited late-night restaurant options, and the only bowling alley in the city is at Cal Poly, which poses some accessibility challenges for the general public.

“We thought this was a really great use because it brings something that we currently don’t have downtown,” Rawson said, adding that the downtown would benefit from having a “venue that can host a variety of things from concerts, to wedding parties, to banquets, to corporate events, on and on.”

As proposed, the project would go into the currently vacant building on the corner of Marsh Street and Chorro Street, which has both a basement-level floor and a small upper level mezzanine.

Discovery SLO’s plans include seven bowling lanes on the ground level and six on the upper; a ground-level concert venue; a restaurant with both ground- and upper-level seating; and upper- and basement-level lounges. The building would require extensive remodeling before Discovery SLO could open.

The SLO Community Development Department has remained consistent in recommending the project’s approval, finding that the project fits the general plan and is consistent with existing downtown uses. Staff’s only major change to the project is the operating hours. Since 2012, the city’s required all new bars to close at midnight, in response to an assessment that alcohol-related incidents downtown spike after the midnight hour, said Kyle Bell, assistant planner with the community development department.

Still, because the space would be acting in part as a restaurant and serving food throughout open business hours, Discovery SLO thinks it should be the exception to the rule.

“The appellant believes it is reasonable to extend the hours of operation until 2 a.m.,” Jeremy wrote in his appeal to the Planning Commission’s decision. “Many other operations are permitted past midnight without food options. Discovery would be the ONLY [sic] establishment in downtown corridor where patrons can enjoy high quality food and alternative activities in comparison to other establishments that serve until 2 a.m.”

Save Our Downtown, on the other hand, thinks that the project should be denied altogether.

“The Planning Commission failed to deny the proposed use as inappropriate with the small-scale, mixed-use character of downtown,” wrote Lopes and Sandra Lakeman in Save Our Downtown’s appeal. “The uses that are being allowed seem to be in pursuit of making the downtown into a permanent ‘party place.’ The uses proposed are not ones that will encourage citizens of the town to come to the downtown area.”

Lopes said that Discover SLO would only work against Save Our Downtown’s goal of making downtown a safe, peaceful place.

“Save our downtown wants downtown to be a real safe and pleasant place to be for all people,” Lopes said. “This club is like a club against that happening.”

Rawson thinks that these concerns are exaggerated, however, adding that the bowling alley would attract people to downtown, and that serving food late at night may even help reduce the problems some blame on the crowds of drunk bargoers.

“I think that some of [the] fears that they have are not really justified,” Rawson said. “The notion that it’s a giant bar is completely misstated. It’s really a restaurant, entertainment, and bowling facility. Yes there are a variety of things going in within the facility, but it’s not as it’s sometimes being characterized.”