Eight months after a local Black Lives Matter protest ended with law enforcement using tear gas, pepper balls, and flash bangs on a crowd of demonstrators, the San Luis Obispo City Council will discuss the findings of a recently finished "after-action report" that breaks down the June 1 events. 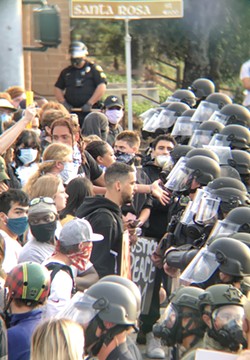 The 40-page report is an item on the SLO City Council's Feb. 16 meeting agenda and is available for public review. Produced by the SLO Police Department with review from James Bueermann, a former Redlands police chief "nationally recognized for his extensive work with after-action reviews, the report compiles the evidence, documentation, and firsthand accounts of the day's protest and police response.

In addition to recounting the events, the report also identifies 10 areas of improvement for local law enforcement. The hours-long protest on June 1 culminated in a tense standoff between protesters and police at the corner of Santa Rosa Street and Walnut Street, in which police would not allow protesters to move forward, concerned that they'd march onto Highway 101, which had happened earlier that day. Police declared an unlawful assembly and then deployed tear gas, pepper balls, and flash bangs to disperse the crowd.

The city compiled accounts from both officers and participating protesters, who were interviewed by Kari Mansager, Cal Poly's director of diversity, inclusion, and outreach.

The 10 issues identified as areas of improvement for local law enforcement included that the blocked-off protesters had only one way to disperse—to turn around and go backward ("this is difficult for crowds"), that no city personnel had a relationship with the group protesting "and thus no way to communicate with them," that officers lacked proper equipment to make a loud enough dispersal announcement, that officers early on appeared in riot gear during a peaceful protest, that police should have had lieutenants in the field overseeing the operation, that police had insufficient staffing at the protest, that mutual aid police agencies lacked sufficient direction; and that police had other insufficient equipment, like outdated body camera batteries.

According to the report, the SLO Police Department has since addressed "many of the issues" and implemented changes.

Nora, a protester who was interviewed for the report, summarized her feelings at the climax of the protest, which occurred less than a week after the death of George Floyd in Minneapolis.

"It felt inevitable that the police were not going to let them through, and the protesters weren't going to turn away," she said. "I had a big sense that this isn't going to end well."

This article was edited to correct misstatements of who authored the after-action review. The SLO Police Department produced the report, and James Bueermann was retained to review it.