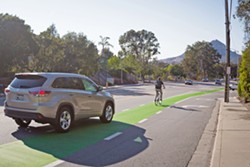 One option—and the SLO City Council's preference—is a two-way protected bike lane that would result in the elimination of 73 residential parking spaces along Chorro, Broad, and Ramona streets. The other is an unprotected bike boulevard down Lincoln Street and a loss of five to six parking spaces.

City officials say the goal of the project is to create a safer avenue for bikers to travel between Foothill Boulevard and downtown.

The City Council's preferred alternative would begin on Chorro at the intersection of Lincoln Street, cut over to Broad Street via Mission Street, and empty onto Foothill through Ramona Street. The two-way boulevard would run on the west side of Chorro, leading to the elimination of 41 street parking spaces on west Chorro between Lincoln and Mission Streets.

Both proposals are attracting significant attention from locals, who have made 178 statements on a city-hosted online forum, Peak Democracy, about the project. The feedback is mixed, but many have expressed concern about the city removing any parking that's now available to property owners.

"I feel very strongly that you should do whatever it takes to save all parking along all of Chorro Street when adding bike paths," one commenter wrote. "That is a special old local neighborhood with older homes and narrow driveways, so street parking is very important to some of those ... who have invested in the ownership of a home."

A city parking study found that under the first option, "parking will be difficult to find on certain blocks of Chorro, Broad, and Ramona," but that parking would generally be available within "a short (1 to 2 min) walk of impacted streets."

But online commenters pointed out that the neighborhood demographics may make even a short walk challenging for residents.

"Let's be sensitive to the seniors of these neighborhoods," one resident posted. "They are plentiful. They need to park in front of their homes. Many don't have the luxury of good health to park across the street or a block down to get to their homes safely."

Many other residents applauded the city's plan.

"My daughter and I ride regularly to her school. A new, separated bike path on Chorro would be a wonderful addition to the neighborhood," a resident stated.

The choices for the bike boulevards will go in front of the city Bicycle Advisory committee on Jan. 18 and then to the City Council for consideration on Feb. 6. Δ