Shake-ups at the top levels of local government continue to rock SLO County with the Aug. 7 announcement that SLO City Manager Katie Lichtig will leave her post on Sept. 28. 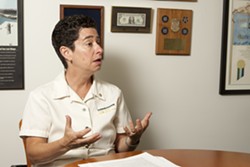 After seven years of serving SLO, Lichtig is returning to the city where she began her government career in the '90s, Santa Monica. The city recruited her to fill the open assistant city manager position.

"I am honored to have served this city alongside the dedicated, smart, and kind staff," Lichtig said in a statement. "I will remember our work together with great affection."

Lichtig took over as SLO city manager in the midst of the Great Recession. SLO Mayor Heidi Harmon praised the level of experience and expertise she brought to the job.

"Her deep institutional knowledge combined with the vision and ideas of a new City Council was a really nice balance," Harmon told New Times on Aug. 9.

In choosing SLO's future city manager, Harmon said experience will "continue to be key" as well as someone supportive of "innovative thinking." She said the City Council will meet in closed session on Aug. 15 to start discussing the future.

While SLO grapples with Lichtig's announcement, the SLO County Board of Supervisors continues its search for a chief administrative officer (CAO). Former CAO Dan Buckshi left his post in early June.

In May, 1st District Supervisor John Peschong told New Times he hoped to hire an interim CAO while the board searched for a permanent CAO. But after holding numerous closed session meetings without reaching a decision, the county recently decided to abandon the interim search and open the search for a permanent CAO. County Counsel Rita Neal said a CAO could be hired in November or December.

Peschong said he hopes to find a candidate all five supervisors, who are often bitterly divided along party lines, can be comfortable with. Assistant CAO Guy Savage continues to hold the duties of acting CAO—without the title or pay.

"Guy is doing a very good job as assistant CAO," Peschong said. "We have some serious issues in this county, and Guy is up for the task." Δ