Starting next year, most new homes and buildings in San Luis Obispo will be all-electric and without natural gas hook-ups.

The SLO City Council approved an overhaul of its building code on Sept. 3 that includes strong disincentives against building new natural gas infrastructure, a move that city leaders claim will help SLO get closer to its net-zero emissions target by 2035. 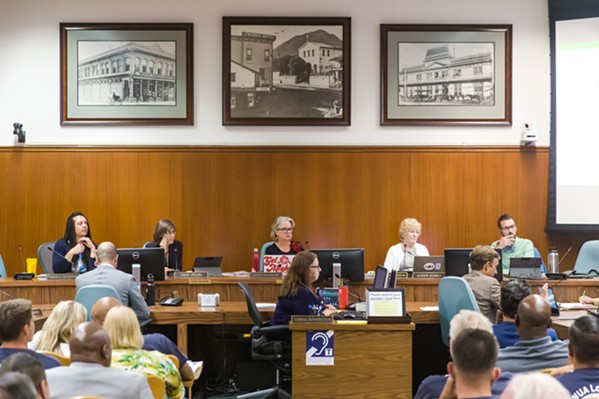 The local code amendments—collectively called the Clean Energy Choice Program—follow a statewide push among progressive cities to electrify buildings. SLO's code, which goes into effect on Jan. 1, 2020, doesn't outright ban new buildings with natural gas, as a recent Berkeley policy does. It uses disincentives, like fees, to discourage natural gas use.

The council voted 4-1 on the changes, with Erica Stewart dissenting.

"I'm proud of us for this work," Vice Mayor Andy Pease said. "I think it's really a balanced, sensible, inclusive way to transition."

SLO's new code has three main thrusts: It requires mixed-fuel (natural gas) buildings to meet additional energy efficiency standards and be pre-wired for electric retrofitting; it introduces a "carbon offset program"—where a builder of a mixed-fuel building must either complete an electric retrofit of an old building, or pay an in-lieu fee to the city to subsidize retrofits; and it mandates solar installations on nonresidential buildings.

"I just don't like that all of this has been pushed upon us so quickly," she said.

City officials and some climate advocates believe that eliminating natural gas in buildings is an important step to moving the needle on climate change. According to a city staff report, by 2035, the code will result in 7,800 fewer metric tons of emitted CO2 per year—a 2 percent reduction in overall emissions. When SLO enrolls with Monterey Bay Community Power next year, it can tout that it delivers carbon-free electricity to those all-electric buildings.

But opponents to the code argue that California's energy grid is not yet clean enough to sustainably support the influx of all-electric buildings and appliances.

Art MacCarley, a Cal Poly electrical engineering professor, told the council that he had assigned a draft of the city's code to his students to analyze. He and his students concluded that the policy didn't hold up to close scrutiny, in part because natural gas plants are still major suppliers of the state grid.

"Pushing all of our energy into a single conduit, through an already vulnerable grid, is not a good idea ... it actually puts us at risk," he said. "Maybe we have this conversation again when we are closer to [having a renewable grid]."

Additionally, community members expressed concerns about how the code would affect the cost of housing and of living in the city. The all-electric code is expected to increase utility bills by $5.45 to $16.85 per month on average, according to a cost study.

"Our homes are not affordable at this point, and we'd only be adding to it," Councilmember Stewart said. "With the way we have it, only the wealthy get to make a choice."

Employees and business owners, from SoCal Gas to Forden's Fireplace Shop, argued that the policy puts existing companies and workers in jeopardy.

"It affects my job, my co-workers' jobs, and my family," Tim, a SoCal Gas employee, said.

In closing comments, Mayor Heidi Harmon emphasized that cities have to act fast and aggressively in the face of the climate change crisis.

"The reason we're in such a jam is we have very, very little time to make this transition," Harmon said. "This is going to be a long and sometimes bumpy road ahead. ... We know this isn't risk free. We know the biggest risk now is to not do anything at all—there's no doubt about that." Δ