Atascadero's Food 4 Less was moderately busy with customers the afternoon of Oct. 12. While a majority were wearing masks, about a quarter of those inside weren't. 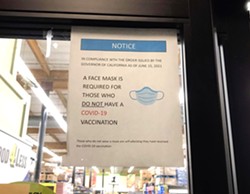 Posted to the inside of the automatic sliding entrance door, a crisp piece of white printer paper read "FACE MASK UPDATE," stating that all customers must wear a mask regardless of their vaccination status.

"We apologize for any inconvenience this may cause and appreciate your patronage," the paper says at the bottom.

According to an email from Atascadero resident Colleen Annes, as recently as Oct. 8, this Food 4 Less location was sending a different message to its customers. In a photo Annes snapped of the store's signage, Food 4 Less was only asking nonvaccinated customers to mask up.

The current San Luis Obispo County health order requires everyone to wear a mask indoors at businesses, regardless of their vaccination status.

Annes reported the alleged mask violations to the county's Office of Emergency Services, which forwarded her complaint to the city of Atascadero's enforcement team, stating that the county doesn't have jurisdiction over city areas.

Terrie Banish, deputy city manager with the city of Atascadero, said in general when the city receives mask mandate complaints, it notifies the business and works with them to fix the issue.

"The city of Atascadero asks for voluntary compliance and [Atascadero Police Department] focuses on education first, rather than disciplinary or punitive action," Banish said in an email. "If the business does not comply, we continue to work with that business and encourage them to seek compliance before writing a citation."

Michelle Shoresman, spokesperson for the San Luis Obispo County Public Health Department, couldn't speak to specific cases of noncompliance, but she said the county has received more complaints about businesses in North County and San Luis Obispo city being out of compliance than other parts of the county.

"Anecdotally, we have received more complaints for those ... regions than from South County or from the coast," Shoresman wrote in an email.

Shoresman said in the majority of cases, education and information is enough to bring businesses into compliance.

"We also recently sent out a mailer to 11,000 businesses in SLO County, including information about the mask mandate and signage they can place in their windows," she added.

In rare cases of egregious violations, Shoresman added, "as we have done since the beginning of the pandemic with other health officer orders, we have issued directed orders at businesses to bring them into compliance." Δ