After weeks of buzz surrounding what’s become an unpopular plan to paint over public art with new public art, the city of San Luis Obispo is going back the drawing board.

Started as a pilot program in 2010, the city pays local artists to spruce up metal utility boxes through the downtown core. The project is designed to deter graffiti and add artistic color to otherwise gray and green metal utility boxes. And it’s worked. The SLO Box Art program became immensely popular and put a spotlight on the city as several other cities replicated the program. 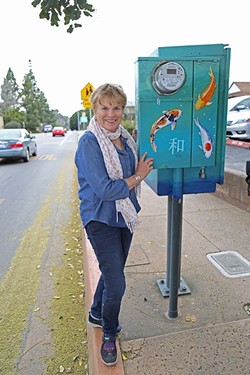 The project garnered widespread support—except for a controversy over one particular box, at the intersection of Pismo and Broad Street, which became the center of ire for a few neighbors who were disturbed by what they considered to be a drug-induced motif.

In February 2015, the City Council decided to make the program an ongoing addition to its public art portfolio and in December, gave the final sign off to fund another round of box art, including repainting new art over several existing paintings. Public Art Coordinator Melissa Mudgett said some of those boxes need repainting because the utility boxes themselves require servicing. Other boxes were scheduled to be “refreshed” as part of what is now a “temporary public art program.”

The city put a call out earlier this month for submissions for the new art, due by March 18. That announcement sparked the local art world to take to social media.

Several community members who have grown attached to the art were bothered that the city would paint over existing art, much of which is still in good condition, and said the city should instead expand the program to other neighborhoods that have expressed a desire for the program.

“It seems smarter to expand to unpainted boxes, and if something is not broke then don’t fix it,” Marcie Hawthorne said. “If it could be modestly repaired, then why not do that.”

Hawthorne, a local artist and muralist, has painted three boxes, including the koi on Chorro Street near Palm Street, “Message in a Bottle” on Chorro between Monterey and Higuera that depicts trout, and one on Higuera and South streets that depicts wetlands birds.

She recognizes the need for maintenance or eventual repainting, and she thinks those should be done as needed. Her wetlands birds painting has a large gray patch—or as she describes as a “great big pimple”—that resulted from box repairs. She concedes the box needs repainting, but added that the koi box is still “absolutely in mint condition.”

“It seems silly to paint over that one,” she said.

Her third painting has a few scratches that could be touched up.

She agrees with the social media chatter that’s coalesced into a somewhat united message—expand the project first, and only mess with existing art as needed.

“The more art that is around, the more value it is and the more visible it is to the community,” she said.

“We really like the boxes the way they are, and we don’t want to see them replaced with new art,” he said. “Instead, we’d like to see them expanded.”

The City Council decided to re-evaluate the plans and consider leaving some boxes as they are, repairing those that need it, and expanding the project to other neighborhoods.

“The intent would be to refresh with new art as they need it,” Mudgett said. “In the end we’re going to have a much better program that addresses these needs, and it’s what the community wants and desires.”