SLO city reports a slight decrease in crime in 2020

Overall crime in San Luis Obispo decreased by 5 percent in 2020, according to an annual city crime report, though some individual crime categories fluctuated dramatically during the COVID-19 pandemic. 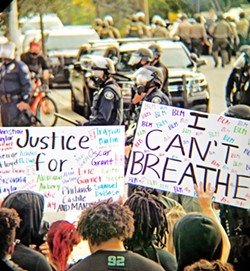 Overall, SLO reported a 7 percent decrease in property crime and a 10 percent increase in violent crime.

The volatile swings in specific crime categories could be partly explained by the pandemic, the report states. For example, police saw a 23 percent decrease in calls for service to downtown because the city "was all but shut down for several months." Calls for homelessness rose 4 percent compared to 2019—making up 22 percent of all calls for service citywide, according to the report.

The decline in sexual assaults, the report similarly states, is "likely attributed to a lack of dating and celebratory opportunities due to the public health orders." A spike in noise complaints could be attributed to residents spending more time in their homes. Residential burglaries increased 9 percent, compared to a 1 percent decline in commercial burglaries, which was also "likely due to the pandemic" and people spending more time at home.

The 2020 crime data, which will be presented to the SLO City Council on May 4, represents an "extremely challenging year for law enforcement," according to the SLO Police Department.

"The department had to balance providing emergency services, maintaining a safe work environment for our employees, educating, and enforcing constantly changing public health order regulations, and supporting community needs including several months of protests and rallies," the report reads.

The report added that filling police vacancies continues to be "extremely challenging." The department lost several officers to retirement and other agency jobs in 2020. Δ