A week after a contentious Feb. 16 discussion about the San Luis Obispo Police Department's use of tear gas last summer, SLO City Council members offered their apologies and regrets to the police force and staff—lamenting that the discussion devolved into "mean," "abusive," and "unhelpful" attacks during public comment. 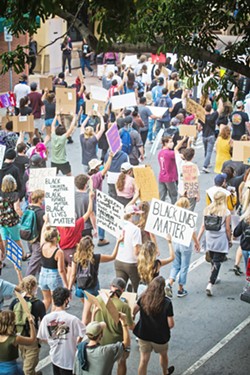 Mayor Heidi Harmon took responsibility for losing control of the Feb. 16 meeting—which lasted until close to midnight and included references to police officers as "pigs"—saying, "we weren't able to hold the line for civility."

"What happened last week was way outside the bounds of how we show up to a City Council meeting," Harmon said. "I'm sorry to all involved. ... Personal attacks are against everything I believe in."

The council had been discussing the SLO Police Department's recently completed after-action report on its decision to use tear gas to disperse a crowd of Black Lives Matter protesters on June 1, 2020. The report drew sharp criticism from activists and residents who felt it served to only justify that decision.

But City Manager Derek Johnson stood by the report on Feb. 23, calling it "thoughtful, thorough, peer-reviewed, accurate, and fact-based." Describing SLO city as a "learning organization," he said the council's last meeting was "a missed opportunity" for growth.

"I'm sorry for the people who work in this organization that they had to go through that," Johnson said.

City Council members took turns expressing contrition while also offering broad comments about last summer's protests and the national push for police reform. The council all agreed that they want to work collaboratively with city departments to "reimagine public safety."

Harmon added that in those discussions, "discord must have space," which "can be uncomfortable and difficult for us hear." But she said, "I reject completely the binary idea that we are on different sides."

"Villainizing each other is not how we're going to best be reimagining public safety together," she said.

Councilmember Jan Marx handed out the sharpest criticism of the local Black Lives Matter movement, saying "occupying the freeway has not in any way garnered the support of our community." She also denounced the push to direct resources away from police departments.

"We don't need to defund them. We need the opposite. We need more resources," Marx said, adding that she supports establishing a police oversight commission.

Marx said demonstrators who were arrested during the protests can wear it "as a badge of honor" and learn from it.

"I have been tear-gassed. I have been arrested during protests. It doesn't wreck your life," she said.

Reflecting on the June 1 protest, Councilmember Carlyn Christianson said that nobody wants "to live in a community that uses tear gas against its citizens."