SLO cleans up: The city of SLO made clearing encampments a priority during the pandemic, contracting with one local company to be on call

San Luis Obispo's stance on homeless encampments led to dozens of sweeps across town and more than 120 tons of debris—the equivalent weight of 10 large school buses—hauled to the landfill throughout the COVID-19 pandemic, according to a New Times analysis of city records. 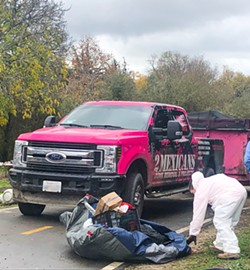 New Times obtained invoices from 2 Mexicans Junk Removal, a local company with a contract to provide regular, ongoing encampment cleanup services for the city. The dozens of receipts show that between April 2020 and January 2022, the junk removal company was dispatched to at least one encampment in city limits per month. During most months, it worked more—as many as six.

Cleanups occurred after city authorities decided to break encampments up and notified residents. Once those residents vacated at the threat of arrest or citation, the company hauled what remained to the landfill. Over 22 months of invoices, 2 Mexicans Junk Removal recorded 120 tons of discarded material, though 40 percent of the invoices didn't include tonnage.

"It does not surprise me. I think that aligns with what we've seen," Kopcinski said of the cleanup statistics. "It does seem very targeted and systematic, and there's multiple sweeps all the time. 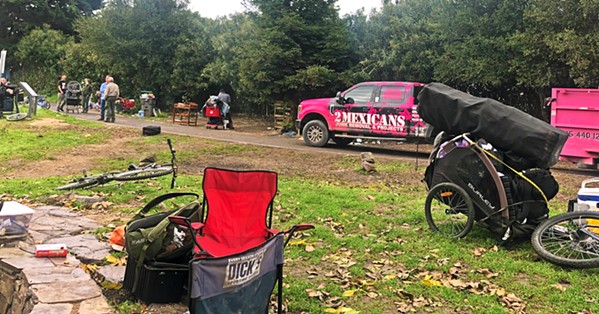 City officials, meanwhile, said that encampments are not safe shelter options for the unhoused, the environment, or the community at large, and the city must enforce against them while also trying to connect people to shelter and other services.

"The city will continue our positive investments of financial and human resources toward supporting our unhoused community, while balancing whole community welfare and taking actions necessary to ensure all members of our community are respecting collective expectations for ... health and safety," Szentesi said.

Prior to 2020 and the pandemic, SLO approached homeless encampments on a case-by-case basis, contracting cleanup work to vendors as the need arose. But in the summer of 2020, the city decided to issue a request for proposals for ongoing, regular "turnkey" encampment cleanup services.

2 Mexicans Junk Removal won the job, charging a rate of $495 per ton of material and more for extra labor. Owner Julian Mora declined to discuss his city contract with New Times, but noted "we are glad to be working to help provide a safe and healthy city for all residents, regardless of their housing status."

The company filed about 70 invoices for encampment work between mid-2020 and early 2022, and received $142,148 in overall compensation. The scope of the cleanups varied, but some were laborious, multi-day projects producing several tons of material and large items like couches and mattresses, according to the invoices.

"We had to rake everything on our knees and crawl it out," read one invoice for an October 2020 cleanup of a camp at "the bridge under the Broad Street bus stop."

Other sweep locations, as labeled on the invoices, included Prado Road, Bullock Lane near the train tracks, Toro Street by the creek, the end of Johnson Avenue, Emerson Park, Laguna Lake, the Bob Jones Trail, and behind the California Highway Patrol office, among many others. Some spaces, like the Bob Jones Trail, had multiple encampments that were cleared several times.

The regular pattern of sweeps continued in February 2022, when the city dispersed an encampment on Feb. 25 off Los Osos Valley Road near the Highway 101 interchange—with 2 Mexicans Junk Removal on-site to haul away what was left behind.

Becky Jorgeson, founder of Hope's Village SLO, a homeless services nonprofit and a party in the California Rural Legal Assistance's lawsuit against the city, is often present at the cleanups. She said that unhoused individuals have a constitutional right to sleep on city property, especially during a pandemic and given SLO County's lack of affordable housing.

"They're breaking the law. They can't kick people off public land," Jorgeson told New Times on Feb. 25. "There's 300, 400, 500 homeless people in San Luis. It makes it harder for us to find them, feed them, and give them clothing. I've got my car full of sleeping bags and tents right now—we don't even know where they are."

Jorgeson also alleged that the city's practice of dispersing encampments winds up destroying personal property. While the city typically provides 72 hours or more of notice for camp residents to vacate, Jorgeson said that people often have nowhere to go and can't carry their belongings.

"Some of these people are disabled and can't move," she said. "Then the cops say 'Take what you can carry. You have one hour.' And then 2 Mexicans sweeps in and takes their stuff. One of my guys is missing a phone, his wallet, and his backpack."

SLO's Szentesi countered that the city has a system in place where encampment residents can store some belongings with the city and retrieve them for up to 90 days. Szentesi added that the police's Community Action Team visits sites before cleanups to try to connect people with shelter and services.

"Based on these interactions, more time may be allowed for individuals to move their belongings and/or enter assistance programs when occupants are ready and willing to accept help, shelter, and services," Szentesi said.

But Kopcinski, with California Rural Legal Assistance, believes the city's overall approach to encampments is doing more harm than good.

"The ongoing sweeps, the ongoing moving of people who are unhoused, and the destruction of their property," Kopcinski said, "just makes it harder and harder for them to get ahead and get in a better situation in their life." Δ