Some people recycle; some don’t. Some ride their bike or walk; some drive. Some conserve energy; some waste it. The question is this: How do we get everybody to make a little effort to keep our planet habitable, because I can tell you this, when it’s Revenge of Gaia time, old mother Earth isn’t going to be able to pick and choose who to save, oh no! She’s going to rain famine and pestilence on everybody, whether they threw a plastic water bottle in the ocean or combed the beaches picking up trash. 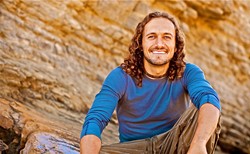 Well, resignedly, I have to tell you it’s Earth Day again, and I find myself asking, what’s changed since last year? What have I done to improve the situation? What have you done? What have we done? It’s easy to get depressed when we look to our leaders for direction and get mostly lip service. That’s why saving the planet has to be a grassroots movement, and if you look to the roots, you’ll see we’re doing better!

Earth Day is all about raising awareness, spreading the word about all the things each and every one of us can do—big things and little things—that cumulatively can make a real difference. That’s why I encourage each and every one of us to head out to El Chorro Regional Park on Sunday, April 21, from 10 a.m. to 5 p.m., to see all the innovations and ideas we’re continually developing to make the planet healthy.

And it doesn’t hurt that there’s a sweet lineup of music presented on two stages to entertain attendees.

Chumash Ceremonial Elder, Medicine Carrier, and Clan Mother of the Bear Clan of the Northern Chumash Nation Pilulaw Khus will open the event at 11 a.m. with a special message from the main stage, followed by signing her book Earth Wisdom: A California Chumash Woman and sharing stories with visitors in her booth.

Aaron Ochs takes the main stage at 11:25 a.m. to perform his “transcendent songs of hope and freedom.” He’s penned several critically acclaimed songs, such as “Rise,” “Reach,” “Now,” and “Everybody Walks Away.”

Burning James & the Funky Flames takes the main stage at 11:50 a.m. to deliver a set of blistering funk and soul music with a lingering NOLA groove (That’s New Orleans, Louisiana, y’all). Deep down, they all just love James Brown! 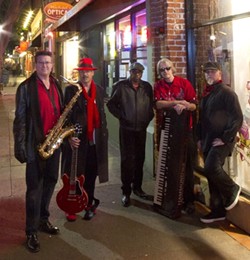 Then over on the acoustic stage, check out Belly Yellers at 12:30 p.m. These two good friends—Chris and Devin—don’t care how big or small the crowd is, only how the music makes the audience feel.

Anyone whose memory extends back to the ’70s and ’80s remembers the great SLO Town blues-rock act Al Millan & The Robots, a band I first saw in the Dark Room in (I think) 1978. It was one of my earliest nightclub experiences, and I fell in love with live music—its intimacy and energy—in that dark, sweaty little hole in the wall on Monterey Street. Al and company return to SLO every once in a while, and it’s usually for a good cause, like this one.

“I have been fortunate to have played with The Robots for over 30 years. We got together in San Luis Obispo. We managed to play and record and ebb and flow all this time even as we all followed our own roads around California, and fate took its hand,” Millan said in press materials.

Natural Incense, a six-piece reggae and rock act that formed in 2007, plays the main stage at 2:50 p.m. In their first three years, they played more than 1,000 shows, releasing an EP and three full-length albums as a trio before deciding to add additional members in 2011.

Red Willows play the acoustic stage at 3:15 p.m. According to press materials, “Their reason for playing is simple, they believe that by playing music, they can tap into the divine spirit of the universe and connect people on a level unable to be reached by a conversation.”

“We feed off the audience, and have enough talent to match the energy of the room,” they said.

For Earth Day, Red Willows will be playing all acoustic with “a chilled out jazz rock vibe.”

At 4:15 p.m. from the main stage, Los Osos-based funk act Funk in Public will close out the day with their passion for “deep funk, soul, New Orleans jazz, and musical friendships.” Formerly known as Hip Deep, their “classic funky groove has been reborn as a hard-hitting instrumental clusterfunk that will get you moving.”

“We’ve always featured some of the best music acts in San Luis Obispo County,” said Sandra Marshall, Earth Day 2013 coordinator. “These musicians play because they care and believe in what Earth Day stands for. It adds a new dimension to a day of discovery and action. Visitors can enjoy for free what they would usually pay an admission
fee for.”

And don’t worry about driving out there: When you ride the RTA, SCAT, or SLO Transit bus to Earth Day, your ride is free! If you must drive, carpool. Parking is free at Cuesta College, and a shuttle bus will transport you across Highway 1 to the park. For more information about the Earth Day Fair & Music Festival, visit earthdayalliance.com or earthdayslo.org.

It’s Open House at Cal Poly, and that means three Cal Poly music ensembles featuring more than 100 of the university’s finest student musicians will perform at 8 p.m., Friday, April 19, in Harman Hall in the Performing Arts Center. The Cal Poly Symphony, conducted by Christopher J. Woodruff, will present Bedrich Smetana’s “Vltava” from “Ma Vlast” and Arturo Márquez’s Danzón No. 2. The Wind Ensemble, conducted by Andrew McMahan, will perform selections from its recent “Strike Up the Band” Pops Concert, including George Gershwin’s “Rhapsody in Blue” with guest piano soloist W. Terrence Spiller. The University Jazz Band I, directed by Paul Rinzler, will perform “Soul Vaccination” by funk band Tower of Power, “I’m Gonna Live ’Til I Die” as recorded by jazz vocalist Sarah Vaughan, and “Cruisin’ for a Bluesin’,” by Andy Weiner. Tickets cost $12 and $14 for the public and $9 and $12 for senior citizens and students. New pricing includes all Performing Arts Center fees, and event parking is sponsored by the PAC (call 756-4849).

Bay Area performer Garrett Pierce heads to The Sanitarium on Saturday, April 20, to perform his unique brand of alt-country and indie-folk, which has made him a favorite among critics and earned him a dedicated cult following. Part of a West Coast tour, he promises that “each night will be something special and unscripted.” Emily Wryn will also perform.

I’m listening to Próxima Parada, a new quartet of Cal Poly grads, two of whom (full disclosure!) were my students (How you doing, Nick Larson and Kevin Middlekauff? Long time no see!). They’ve got a soulful groove going, but not overly polished, and I’m digging the horn on “Who You Callin’?” Their track “Blues in Dijón” features crisp guitar work and that same soulful, dirty saxophone rolling through another bluesy groove. They just released their first EP, Makes You Wanna, and to promote it, they’re going to play a free in-store show at Boo Boo Records on Record Store Day, Saturday, April 20, at 4 p.m. You can also check them out next Thursday, April 25, when they open for Tumbleweed Wanderers at SLO Brew.

“The Thai Bounty has moved from a cramped boat to a more spacious location along the Embarcadero, with a sunny courtyard perfect for live music,” Billy Foppiano told me. “Meet the Foppers, the father-son duo of Billy and Charlie Foppiano, will be throwin’ down on Sunday, April 21, from 1 to 5 p.m. Can you handle two guitar wizards at once? It’s like putting a hot Thai chili on each side of your mouth and biting down hard!”

You like high school bands? Cal Poly’s got ’em in spades! The Cal Poly Music Department will be host to the Cal Poly All-State Festival Concert, featuring more than 100 of the state’s best high school musicians, at 2:30 p.m. Sunday, April 21, in Harman Hall in the Performing Arts Center. Tickets to the concert are $12 and $14 for the public and $9 and $12 for senior citizens and students (756-4849).

Congregation Beth David promoter Stanley Stern has cooked up another special event for you on Sunday, April 21, when Baba the Storyteller plays “A Storytelling Concert at the Temple” from 3 to 5:30 p.m. “He’s a most unusual person,” Stern said. “He studied the art of African storytelling and also plays several African instruments such as the Kora and Djembe. He uses the instruments to help his storytelling. Zette Harbour is the wife of Michael Nowak, our Symphony conductor, and is also a professional storyteller. My wife Carol Stern leads classes at the Temple in Genealogy but used storytelling in her teaching career and has become a storyteller at the Temple using events in her family’s history. So this is an unusual concert with music that aids the stories and brings a wonderful flavor to the stories, and makes them memorable.” Tickets cost $15 at the door.

Girls & Boys will be performing at The Cliffs with The Mother Hips and Huckle on Sunday, April 21. Head on down and enjoy some sun, the beach, and food and drink.

Get your Hawaiian groove on when Hapa plays SLO Brew for a special seated event on Wednesday, April 24 (doors at 7 p.m.; all ages; $23 presale or $25 at the door). The band’s Pan-Polynesian music mixes influences as diverse as ancient genealogical chants, Portuguese fishermen ballads, Spanish vaquero music, and the melodies and harmonies of church choirs of the early missionaries.