SLO Council says yes to Nacimiento, but voters may decide

The San Luis Obispo City Council decided at a special meeting to move forward with the Nacimiento water pipeline project, even as project bids came in close to $30 million over initial predictions. The five participants in the project Paso Robles and San Luis Obispo, along with water purveyors for Templeton, Atascadero, and Cayucos were given the option to pull out if bids came in at more than $150 million. The pipeline is now expected to cost $178 million, but none of the parties seem likely to drop out, even as the project comes under increasing public scrutiny for the way it's being financed.

Council member Andrew Carter called the move "a decision for the ages," adding that future generations will be grateful. 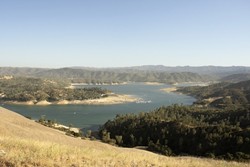 # That sentiment, however, is lost on Terry Mohan.

In June, the local activist led an 11th-hour battle against rising water rates, but was unable to collect 7,200 written appeals needed to stop them. Using Proposition 218, Mohan is again attempting to overturn the council's decision. He has filed papers to circulate a petition to have the issue brought up on November's ballot. This time, Mohan needs just 2,830 signatures.

Not far behind, Paso Robles resident John Borst has challenged the legality of the hikes in a letter to the Paso Robles City Council. As currently planned, Paso Robles residents will see a flat fee of $60 per month rather than an increase based on usage to pay for the pipeline. He said he may push to take the matter to a vote if the council doesn't change that funding mechanism.

"I feel that they are in violation of Proposition 218 by imposing the fee," Borst said. "The method chosen by the City Council to impose the fee appears not to honor the concerns and interests of the people."

Borst is awaiting a response from the city attorney before moving forward, but has said that he will look to legal means, such as a ballot initiative, to repeal the rate increase.

Paso Robles Mayor Frank Mecham said that such concerns are being taken seriously. He said that he and the council will explore ways to change the fee, particularly as it impacts the elderly or people on fixed incomes.

But Mecham also warned that if the pipeline doesn't go forward, the city may have to build a new sewer project to deal with discharge issues and a new plant could easily cost residents more than the $60 fee.

"If people are so inclined to try to take this to the ballot, that's what the democratic way is all about," Mecham said, "but right now they've also elected us to make these tough decisions, and we believe this is the best course."

SLO city staff called the Nacimiento project one of the largest ever undertaken in the county, bringing a total of 15,734 acre feet per year to the county with 45 miles of pipeline.