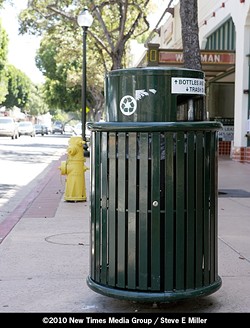 Though the city of San Luis Obispo is facing a $3 million hole in its upcoming budget, the City Council decided to pull the trigger on a $640,000 improvement scheme for three downtown blocks and two art projects: one totaling $34,000 and another $125,000.

The council voted unanimously at its June 15 meeting to approve the art projects and the downtown improvement while cutting more than $3 million from the general fund. The city’s budget is approximately $100 million, with the general fund accounting for around $52 million.

The council voted 4-1 for the cuts; Councilwoman Jan Marx opposed, saying the reduction of funding for firefighting training was unacceptable. Some road paving, storm drain repair, and janitorial services will be cut, as will coaching positions for children’s sports teams. Sidewalk cleaning and tree trimming will be reduced.

Most of the city’s departments will have to reduce spending by three percent. The police and fire departments will reduce their budgets by one percent. Some firefighting training and training positions will be eliminated, and there will be a small reduction in money for lights, personal protective equipment, and fire suppression materials.

The $640,000 will be spent on three blocks of Higuera from Morro to Broad Street. Sidewalks will be broken up and replaced by “Mission-style” sidewalks, tree grates will be upgraded, and new stylized news stands will be installed. Trash cans will be replaced with spiffy models and some large trees will be felled and replaced..

Mayor Dave Romero said the upgrades will help make the downtown a bigger draw for tourists and will be a great aesthetic and financial benefit to the city.

The $34,000 art project will cover artists painting downtown utility boxes at a cost of approximately $2,000 a box. The $125,000 project will go to San Diego Artist Jeffrey Laudenslager, who will build a 35-foot stainless-steel and titanium sculpture over the water fountain at the intersection of Marsh and Higuera. The money for that art project will come from a separate account, funded by developers paying into it instead of incorporating art in their projects.

The city’s financial department predicts an ever-increasing hole in the city budget—a structural deficit that may grow larger if employee costs continue to increase. It estimates the city will face another $3 million annual shortfall for the 2011-13 fiscal years.

Add scheduled pension payment hikes to the mix, and the budget gap rises to $5 million by 2013. If Measure Y, a half-percent sales tax, is rejected when it comes back for voter renewal in 2015, the city could face an $11 million shortfall.