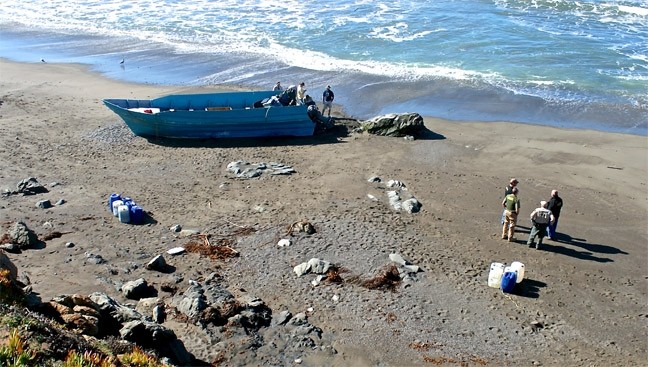 The San Luis Obispo County Sheriff’s Department will be adding a new boat to its fleet to help the department deal with an influx in pangas.

The SLO County Board of Supervisors gave the go-ahead April 22 to use $493,013 in federal grant money to buy the boat and such other specialized equipment as night vision devices and a license plate reader. The funding comes as part of Operation Stormgarden, a federal program designed to enhance border security.

Since 2012, a total of 12 pangas—large wooden fishing boats adapted to transport drugs and people—have been discovered along the coastline in SLO County. So far, officials have seized only marijuana in this county. Sheriff Ian Parkinson said that the quality and value of the contraband and equipment on the boats has improved, and there’s concern that the boats are or will be carrying such higher valued drugs as cocaine, heroin, and methamphetamine. Parkinson told the supervisors that a panga carrying methamphetamine was recently seized in San Diego. So far, 62 people have been arrested locally on suspicion of being involved with the smuggling operations; 35 of them are currently in SLO County jail awaiting prosecution.

Parkinson said that while drug and human smuggling are often an issue of federal jurisdiction, the arrival of these boats in SLO County has created a local challenge.

“This is one of those issues that when it hits the beach, it becomes ours,” Parkinson said.

The county’s hoped-for boat, a 27-foot Defender-class vessel manufactured by a Washington-based company, would be dual purposed—used primarily for recovery and removal of beached pangas, as well as offering the department patrol capabilities. Other counties in Southern California are also considering using a similar boat, which marks a new step in a multi-county effort that’s received wide-spread attention, including support from Congresswoman Lois Capps, who met with law enforcement agents from SLO, Santa Barbara, and Ventura counties on April 21.

While the supervisors showed support for the department’s ongoing work in addressing panga arrivals, they posed a thorough list of questions regarding the particular need for a dedicated boat and the associated costs for its operation and maintenance, expressing concern that once the initial grant money was used to buy the craft, federal funding would dry up and leave the county to cover future costs. Parkinson said that federal funding has so far covered other panga-related expenses, with more funding currently available to cover overtime costs this year.

“If I spend within our means, our patrol for pangas could happen weekly. It really depends on when we see the need,” Parkinson said. “We’ve gotten a pretty good idea for the conditions that they like to exist in.”