by Karen Garcia and Kasey Bubnash

Hordes of Central Coast residents took to their social media pages on June 26 to cheer the San Luis Obispo County Regional Airport's announcement that it will soon offer direct flights to Las Vegas, a move that could impact the Santa Maria airport's limited flight options.

Santa Maria Public Airport General Manager Chris Hastert said that while the announcement came as a surprise, he's not worried about any hits to Santa Maria's longstanding flights to Vegas—which are offered several times a week at relatively low prices by Allegiant Air. 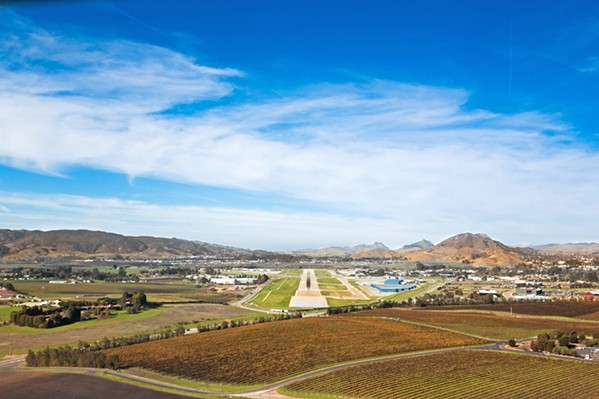 The flights will be offered on a 30-seat plane four times per week—on Thursday, Friday, Sunday, and Monday—with flights departing Las Vegas in mid-morning and returning from SLO in early afternoon. Every flight will include complimentary snacks, beverages, and a free checked bag, according to the press release, and Contour plans to offer its initial fares at a lower than usual price, starting at $99 one way.

Until now, Santa Maria has been the go-to place on the Central Coast for inexpensive, easy, and direct flights to Vegas, and those flights have kept the Santa Maria airport's commercial flight operations alive.

"If you look at airports along the Central Coast from Santa Barbara to Monterey, we all share various overlap in service because of the communities we serve. Yes, we're closely spaced, but we have very different markets, and the region is large enough to support multiple flights a day on many routes," Kevin Bumen, director of SLO County airports, told New Times.

Bumen said Contour Airlines, which is the airport's fourth and newest airline, has been operating out of the Santa Barbara Airport for about a year.

The lack of commercial flight services for Santa Maria's business and leisure travel communities has been a major concern for the Santa Maria Public airport District board of directors for years.

Although Hastert said Santa Maria's airport will likely see some impacts to its ridership numbers because of SLO's deal with Contour, he expects those effects to be insignificant.

Contour's discounted, introductory prices of $99 one-way are more expensive than Allegiant's usual prices, Hastert said, and while each Contour flight to Vegas will offer only 30 seats, Allegiant's aircrafts hold up to 150.

Hastert said airport staff plan to monitor the situation closely, but he estimates that as long as people like to go to Vegas for fun, Santa Maria's flights will do well.

The airport's highest priority, Hastert said, is re-establishing hub service to benefit the business and military community. He said that the board hopes to partner with a major airline that could provide eastbound flights to hub airports in Denver, Phoenix, or Salt Lake City.

• At the end of June, French Hospital Medical Center announced the launch of its Beyond Health fundraising campaign for the $125 million campus expansion that includes a four-story patient care tower that will double their capacity. The hospital already has almost $101 million committed, with $95 million being invested by Dignity Health and the balance coming from many private donors in the San Luis Obispo County community. The investments will fund the development of the four-story 85,000-square-foot hospital addition that includes 56 new private patient rooms; a 16-bed neonatal intensive care unit; an additional 10 intensive care unit beds; new front entrance, lobby, and dining area; a rooftop garden terrace; expanded space for imaging, labs, materials management, and food preparation; a helicopter landing pad; new non-denominational chapel; and a parking structure to accommodate the growth, with construction on the parking area to start by the end of 2019. The expansion is planned for completion by 2022. To learn more about the project, visit gobeyondhealth.org. Δ