For those who follow it, the saga of state water on the Central Coast is a frustrating one.

When the State Water Project was first built in the 1960s, the San Luis Obispo County Flood Control District purchased rights to 25,000 acre-feet of water per year, an amount that could serve about 125,000 households. 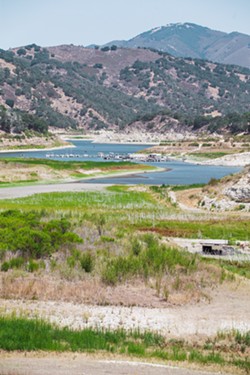 Decades later though, in the 1990s, when it came time to develop the Coastal Branch infrastructure to pump state water from the Central Valley to the Central Coast, SLO County only paid for 4,830 acre-feet per year of delivery capacity, less than 20 percent of what it has the rights for.

"When it was time for people to say whether they were in or out [of the Coastal Branch], there was a lot of opposition to state water for growth reasons," said Kate Ballantyne, the current deputy director of SLO County Public Works. "So they [SLO County] only invested in the infrastructure we knew people were willing to pay for."

The Central Coast Water Authority (CCWA) took more interest, and the Santa Barbara County water contractor ended up owning the infrastructure that brings state water to the Central Coast, sharing it with SLO County. After treating state water at Polonio Pass near Shandon, CCWA pipes it to the 24 state water subcontractors in the two counties, including cities like Morro Bay, Pismo Beach, and Santa Maria.

The CCWA says it could—and wants to—deliver more state water to the region. But it doesn't have rights to more. And SLO County, because of its capacity compared to its supply, regularly leaves available state water on the proverbial table. During good water years, when the county gets lucky, it can store "carryover" state water in San Luis Reservoir for future years.

Ballantyne summed up the dilemma like this: "They [the CCWA] often have more capacity available to them then they have water to deliver. And we have often more water than capacity to deliver."

As the Central Coast faces another drought, SLO County and the CCWA are attempting to strike a deal that they say could help unlock more of the state water belonging to SLO County.

According to a draft of the agreement, which got conceptual approval from the SLO County Board of Supervisors on March 15, SLO County would allow the CCWA to treat and deliver its stored state water at an amount 2,000 acre-feet above its 4,830 acre-feet delivery capacity. As compensation, the CCWA could take half of that water—1,000 acre-feet—for Santa Barbara County communities.

Ray Stokes, executive director of the CCWA, called the exchange "a win-win for both entities."

"It's more water for both counties," she said. "We wouldn't be able to access it, and it gets more water to our partners in the Central Coast branch."

The agreement, which would be unprecedented, is only possible now thanks to a recent state policy change that affords state water contractors the flexibility to buy, sell, or swap water rights with one another to meet their needs.

"That's really the only reason we can do it," Stokes said. "We tried to do this years ago. The state water contract was so restrictive at that point in time that California wouldn't allow it."

Both agencies' officials believe that it could ultimately serve as a blueprint for increasing state water deliveries to the Central Coast in the future. The CCWA and SLO County recently completed a joint study that analyzed potential options for future collaborations.

"There'll be more to come," Ballantyne said. "This particular effort is a short-term drought mitigation strategy. Maximizing our use of state water is a board priority."

As of this year, SLO County has 12,000 acre-feet of stored state water available in San Luis Reservoir—or roughly enough water to serve 60,000 households for a year. The goal of the proposed partnership is to be able to deploy that "extra" water more swiftly, and not have to wait on the limited county capacity.

According to the recent joint study, state water stored in San Luis Reservoir can "spill over" in wet years, or get lost. That's happened in the past, leading to "lost opportunities." Officials see more uncertainty with stored state water in the future.

The initial agreement for 2,000 acre-feet is "enough water to make a difference," Ballantyne said. That rang true after the state announced on March 18 that it plans to deliver just 5 percent of its state water allocations this year.

The key with state water moving forward, Ballantyne emphasized, is that the Central Coast is positioned to bring its supply to the area when it's available.

"The nice thing about state water is it's a geographically diverse water source for us," she said. "So when it doesn't rain locally and it snows, we have access to water we otherwise wouldn't. It's nice to have it when we need it."

Local towns and cities are watching the discussion with interest. With Lopez Lake reservoir levels dwindling, Arroyo Grande is one city that is exploring state water as a potential alternative source.

The state water pipeline currently connects to a water treatment and storage facility near Lopez—so getting that water would be a matter of purchase and delivery, according to Arroyo Grande City Manager Whitney McDonald.

"We're certainly interested in what the county's doing because it could actually give us additional water very soon," McDonald said. "Our area, I think historically, has used water as a land-use tool, trying to control development and excessive and fast-paced development from happening through control of water supply. And I think people are starting to look at things differently. At a point, it's starting to hurt the people who are here, because we're running out of water." Δ