New air quality data in South County has given local air pollution control officials a clearer picture of what areas are most impacted by wind events at the Oceano Dunes—triggering a change to air quality forecasting maps. 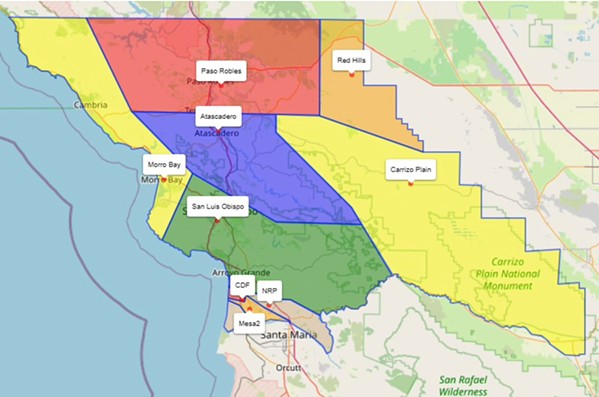 SLO County has seven geographic zones for air quality forecasting and reporting purposes, and South County is split into four additional subzones that are tied to dust pollution levels at the Oceano Dunes.

A new study released in May by the SLO County Air Pollution Control District (APCD), though, showed that some areas of Oceano and Nipomo experience less pollution than was previously known. The APCD adjusted the boundaries of the four zones accordingly.

"What we did was install some additional air visual monitors down in the Oceano area," said Meghan Field, air quality and public information specialist at the APCD. "We found some areas in Oceano and in the Nipomo Mesa where the air quality wasn't as bad as we originally thought. Those monitors helped us refine the zones."

One outcome of the boundary tweak was it moved an area near Dorothea Lange Elementary School in Nipomo to a less severely impacted air quality zone. The school is now in the NRP zone, which has better air quality than the Mesa2 zone and CDF zone, but much worse air quality than the neighboring San Luis Obispo zone.

Field encouraged residents of South County to take a look at the new map, which is available at slocleanair.org, to see what zone they live, work, and take their kids to school in now.

"People have really become accustomed to those forecast zones," she said. "Especially as we go into this wildfire season, people are more aware of where their home is and what air quality looks like in their area."

The APCD study, which was based on monitoring data between 2017 and 2021, also found that the air pollution levels in the CDF zone—Oceano's most impacted zone, bordering the Oceano Dunes State Vehicular Recreation Area—had declined somewhat.

"The likely cause of this is the dust mitigation measures installed upwind of the [state park]," the report stated.

The APCD board of directors received a staff presentation on the report and zone changes at its May 26 meeting, which is also available at slocleanair.org. Δ