San Luis Obispo County has finally chosen an outside company to take over medical and mental health services at its jail.

The SLO County Board of Supervisors voted 4-0 on Dec. 11, with 4th District Supervisor Lynn Compton absent, to award the $6.7 million contract to correctional health care giant Wellpath, known previously as California Forensic Medical Group before a recent merger. Beginning Feb. 1, 2019, the company will be responsible for providing medical, dental, and behavioral health services to the jail's inmates. 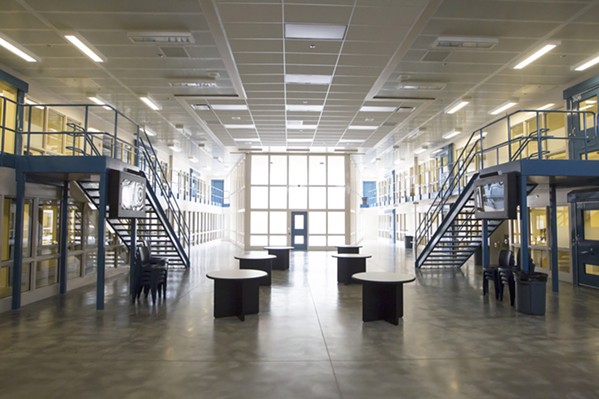 While the path to outsourcing those services at the jail was preceded by high-profile inmate deaths, public protests, and litigation, the final vote on the contract was relatively subdued, with it included as part of the board's routine consent agenda rather than a separate item.

Some of the services the company will provide at the jail include intake health screenings, intoxication and withdrawal management, and general care for sick inmates in the jail's newly opened clinic. The company will also provide mental health assessments, individual and group therapy, and other services for mentally ill inmates. In addition, the company will work to get the jail accredited by the National Commission on Correctional Health Care (NCCHC).

"This standard, as defined by the NCCHC, exceeds the state standards by which California jails are measured," SLO County Sheriff Ian Parkinson said in a written statement to New Times. "In addition, this change will promote, protect, and better serve the inmates by obtaining national accreditation within one year, which is a critical component of jail health care services."

The contract also requires the company to help implement a jail-based competency treatment program for mentally ill inmates declared incompetent to stand trial. According to the contract, the sheriff's chief medical officer, a position currently held by Dr. Christy Mulkerin, will be responsible for the management and oversight of the contractor.

According to Wellpath's website, the company services more than 130,000 patients at 349 jail facilities. Wellpath did not respond to a request for comment from New Times.

"Our goals, on behalf of our local detention clients, are to improve patient care and clinical quality, reduce cost, mitigate risk of malpractice and litigation, and increase stabilization and operational efficiencies in county jails and other local facilities," Wellpath's website states.

That includes the Santa Barbara County Jail, where the company, then called California Forensic Medical Group, took over care from another contractor, Corizon Health, in 2017 amid public concern and litigation over the quality of inmate health care at the facility. According to a 2017 Santa Barbara County grand jury report, the average number of inmate grievances dropped since the company took over the contract. Fresno County also dropped Corizon and brought the California Forensic Medical Group on board to run its jail medical services in April of this year.

While those reports might indicate promising progress, California Forensic Medical Group is not without controversy. In September, the company, along with Monterey County, settled a lawsuit in connection with the death of Larra Ann Gillis, an Monterey County Jail inmate who died in the hospital after spending an estimated 28 hours in custody without medical treatment. The company will split the $825,000 settlement with the county, according to a statement from Arias Sanguinetti Wang & Torrijos, the Los Angles law firm who represented Gillis' family in the lawsuit.

SLO County's decision to outsource inmate medical and mental health services comes after similar public scrutiny and concern. Last year, the county paid out a $5 million settlement to the family of Andrew Holland, a schizophrenic inmate who died in custody after being strapped in a restraint chair for nearly two days. Holland was one of 13 inmates who've died in custody since 2012. Currently the county is involved in two lawsuits over inmate deaths allegedly attributed to inadequate mental health or medical care. In addition to the lawsuits, both the FBI and the U.S. Department of Justice are conducting ongoing investigations at the jail.

At the Dec. 11 meeting, 2nd District Supervisor Bruce Gibson said he hoped that the Sheriff's Office would work with other SLO County departments to ensure compliance at the jail would be "publicly transparent."

"It is truly a partnership in solving what can be complex issues," Parkinson said. Δ