A young woman sitting on the stand in SLO County Superior Court speaks so softy she can barely be heard.

She casts her eyes down at the carpeted floor of the courtroom and tells a room full of strangers about the four days she spent as a teenage sex slave, being coerced into having sex with a man named Richard Scott Brooks.

“I think from the beginning, he told me that I was basically his property,” she says.

The jury and members of the media watch as she talks about how Brooks had sex with her while she was unconscious and later arranged for her to have sex with another man, Oscar Higueros Jr., for money. Later, she will have to watch as prosecutors show her and the jury large, sexually explicit photos of her found in Brook’s possession.

She does it all knowing that she will have to go through it again after Brooks’ trial, when she will be called to testify against Higueros.

The woman, referred to only as Jane Doe, is one of the many victims who pass through SLO County’s justice system. The process can be harrowing and terrifying. Even when justice is served (both Brooks and Higueros were found guilty), those victims must continue to live their lives—to piece themselves back together and plow forward with life.

That’s where the SLO County District Attorney’s Office Victim and Witness Assistance Center steps in. Crewed by a tireless group of dedicated staff members, the department’s mission is to guide victims through the court process and connect them with vital services to help them move on.

“We are there to support them,” Diana McPartlan, SLO County’s victims and witness assistance director, told New Times

McPartlan and her staff assist victims in obtaining a number of services, which are paid or reimbursed through a special fund from the California Victim Compensation Program (CalVCP). The program allows victims to file claims for those critical services, including money for medical and dental expenses for injured victims, compensation for lost wages, therapy and mental health counseling, relocation expenses, and even funeral and burial expenses for victims of homicide and manslaughter.

“No one plans to be a crime victim,” said Julie Nauman, executive officer for the California Victim Compensation and Government Claims Board. “Often, they don’t have any resources to cover the cost of what has happened to them.”

The state’s program, established in 1965, is funded by restitution fines, penalties, and assessments levied against individuals convicted of crimes and traffic offenses in California, as well as some federal funding.

Many of those seeking compensation in SLO County became victims at the hands of other family members. McPartlan said many people the county assists in getting services through CalVCP and elsewhere are the victims of domestic violence or sexual assault.

“There are over 800 domestic violence cases and 150 sexual assault cases sent to the [SLO County] District Attorney each year,” McPartlan said. “That’s not including kids.”

Whatever kind of crime they experienced, many of those victims seek to heal themselves both physically and mentally from the trauma they endured. McPartlan said the most common services people seek compensation for are medical and counseling assistance.

According to the CalVCP data obtained by New Times, more than $103,000 of the $463,002 in total victim compensation claims paid out in SLO County covered medical expenses. The state also paid out more than $194,000—a little more than 42 percent—for mental health services to SLO County crime victims in 2015.

Nauman said the distribution of compensation in SLO isn’t much different from what is occurring statewide.

“One of the No. 1 services is mental health counseling,” she said.

The fact that therapy and counseling top the list for crime victims’ services in SLO County isn’t a surprise to Matthew Chirman. Chirman is a licensed therapist with Tidelands Counseling in SLO, and works with individuals recovering from domestic violence, child abuse, post-traumatic stress disorder, and other trauma.

Chirman said that the trauma of a crime can affect nearly every interaction a victim has with the world around them.

“I think the most devastating impact it has is that it changes the way people see the world,” he said. “A lot of us go along feeling like the world is a pretty safe place, but a violent crime can really shatter that perception of the world.”

The negative impact of violent crime can be even more difficult in cases of domestic abuse and sexual assault, where the perpetrator is often someone the victim knows, such as a spouse, friend, or family member.

“That makes the dynamic much more complicated. Trust becomes the big issue,” Chirman said. “It is someone that you love and hopefully trust, and when that trust has been violated, it makes relationships and moving forward extremely difficult.”

Whether it occurs at the hands of someone familiar or a stranger, Chirman said that many survivors of violent crime also deal with feelings of guilt, wrestling with thoughts that they might somehow be to blame for what happened to them. Talk to Chirman about the issue, and one word that comes up over and over again is “trust.”

“They need to learn to trust again,” Chirman said. “And it’s a slow process.”

It’s that trust that civil servants like McPartlan and Nauman hope to restore in victims by connecting them to important services like those Chirman offers.

While there’s no arguing that there’s a need to provide crime victims with access to therapy, medical care, and other services, the number applying for help under the CalVCP program in SLO County is decreasing.

Ultimately, the decision to approve a victim’s compensation claim is made by the state. McPartlan said she’s seen the amount of money the state program pays out in claims fluctuate over the years.

“I think [the state] got really strict on what they were approving,” she said. “They were kind of on a rollercoaster.”

However, McPartlan did say that she thought there could be a rise in the number of applications approved and of the amount of money paid out for services in SLO County in the near future, thanks to recently passed legislation.

Despite the recent decline, Mcpartlan and her staff are still working hard to get survivors of crime the services they need. In her interview with New Times, Nauman said that SLO County’s rate of submitting claims to the compensation program was higher than the statewide average.

Nauman added that CalVCP was committing to raising awareness about the program and the services available to victims, encouraging them to be aware of their rights and to reach out for the help they need.

“We do a lot of outreach,” Nauman said. “We want applications to come in.”

That outreach is becoming more important than ever, especially when it comes to getting the word out to populations that are underserved. According to Nauman, those groups include the elderly, the disabled, and Native American and tribal peoples.

The program must also serve the needs of victims of emerging and new crimes, such as human trafficking and online stalking and harassment.

“We try to be responsive to the way society develops, and how those changes can result in victimization,” Nauman said.

With the state’s victim compensation program more than 50 years old, the need to keep pace with new developments, changes, and the needs of victims is ever-present. One way it hopes to keep pace with the changing times is through recently passed and proposed legislation meant to update services, make access for victims easier, and to keep up with the rising cost of the services they need. 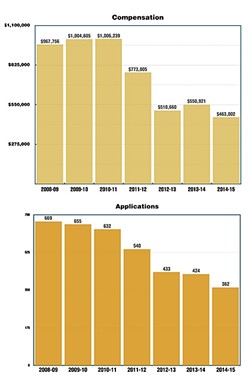 In October of 2015, California Gov. Jerry Brown signed Assembly Bill 1140 into law. The bill improves access to several benefits, including increasing the limit on victim relocation benefits from $2,000 to $4,500 and raising the total award limit from $63,00 to $70,000. The bill also allows for victims to be reimbursed for lost wages when they have to attend medical, mental health, and other appointments.

The bill also modernized the program to stay abreast of growing crime trends, allowing for compensation for an emotional injury incurred by victims of child pornography and for the crime of “cyber exploitation.”

Even with the bill freshly signed into law, there’s already another proposed bill aiming to further retool victim compensation in California.

Introduced by Rep. Rob Bonta (D-Oakland), AB 2160 aims to remove barriers to compensation for some victims. That includes providing reimbursement for victims’ transportation and child care costs, among other changes to CalVCP.

“AB 2160 helps California meet the needs of crime victims and their advocates,” Bonta said in a written statement issued shortly after the bill’s introduction. “From the woman who stays with her abusive spouse because she can’t afford to leave, to the single father who is missing work to care for a child who witnessed gun violence.”

Bonta’s bill was introduced in February of this year and is still working its way through the state’s legislative process.

As officials and employees like Nauman work to raise awareness and administer the state’s compensation program to victims, and legislators like Bonta try to keep the program relevant, funded, and effective through the machinations of California’s legislative process, the ultimate hope is that their efforts will yield a direct impact for victims in places like SLO County.

Locally, it’s up to McPartlan and the other members of the DA’s Victims and Witness Assistance Center to be the boots-on-the-ground conduit for that support. Their work is critical for survivors like the young woman victimized by Richard Scott Brooks and Oscar Higueros Jr.

Services are confidential, but at a recent SLO County Board of Supervisors meeting, another woman made it clear just how important those services are to victims and their families.

She is the mother of a young daughter who was one of three minors sexually assaulted by a family member. She wiped tears from her eyes as she appeared before supervisors on April 4 and described the impact that the crime and subsequent criminal justice process, which took nearly two years, had on herself and her young daughter. She called it “devastating and scary.”

What got them through, she said, was the center’s staff members, who were with them for every step of that process.

“They quickly became a safe place we could rely on, especially when we felt alone and defeated,” she said. “Without this program, we would have certainly succumbed to the legal process. Our family could not have gone through the process without them fighting for us.”

Later at the meeting, McPartlan spoke, and asked her staff to stand up so the board and others could recognize them for their work with the county’s crime victims. There were only a few of them in attendance to do so.

“A lot of our staff are in court,” she explained, sounding not at all apologetic.