Spotting a beaver-made dam is like walking into another world, according to Audrey Taub.

"You're walking through this sandy-dry arid environment, and then all of a sudden it's green, lush, and full of birdsong and herons. You can even see the fish and frogs," Taub said. "Something big is happening here." 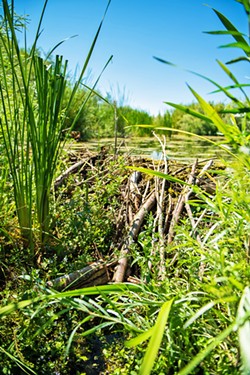 Taub founded the San Luis Obispo County Beaver Brigade, a local advocacy group whose efforts include raising awareness about beavers in the county and educating the community about how beavers benefit wetland habitats.

The group, which is almost a year old, came about after Taub had a conversation about climate change with friends that left her wondering what she could do in her community.

She realized that over the past 15 years she'd spent a lot of time going to the Salinas River and checking out the existing beaver dams, and she decided that would be her focus. The advocacy group formed a partnership with the nonprofit Biodiversity First! and started with trash cleanups in the Salinas Riverbed and a trash bag pickup system for the unhoused individuals who live in the area.

The brigade is now working with Emily Fairfax, an assistant professor of environmental science and resource management at California State University Channel Islands.

Fairfax and Taub connected because Fairfax was moving to California from Colorado and wanted to find areas with beaver populations to study. She's studied beavers her entire academic career.

A Google search led her to the Beaver Brigade, and now Fairfax studies SLO County beavers and leads educational walks to limited groups—for the time being.

Through her research thus far, Fairfax found that beavers have been present in the Paso Robles region of the Salinas River since 2013. In that time, 59 unique dams have been fairly active.

Biodiversity First! developed a university-funded grant opportunity for Fairfax and a group of students to study beaver complexes in the upper Salinas River through 2021. The grant, "Beavers, Climate Change, and Ecosystem Resilience," will result in the first peer-reviewed study of beaver habitat in San Luis Obispo County.

In Southern and Central California and in the Salina River, especially, Fairfax said, the most pressing benefits of beavers is their ability to create wetland habitats that are resistant to stressors like droughts and wildfires.

"The way that beavers dig channels around the landscape, ultimately, makes it so that these patches in the landscape can withstand droughts and fires because it's so soggy. It just holds a lot of water there and keeps it green and lush even when the rest of the landscape has been put into a degraded and stressed-out state," she said.

Trash isn't ideal in our natural habitats, but Fairfax said a beaver would create a dam from almost anything; trash doesn't disrupt their work and neither do unhoused individuals. However, she found that unleashed dogs, horses, all-terrain vehicles, and manmade fire prevention plans that remove certain greenery from a beaver dam area do disturb beavers.

To help preserve the beavers and their creations, she said, practice "leave no trace," keep your pet on a leash, and don't take any half-chewed sticks floating in the water.

"The beavers are actually leaving themselves little snack trails, so when they're out working they have sticks out there. Don't take their snacks; it's not polite," she said.

If you see a beaver, don't disrupt it. Fairfax said it might slap its tail on the water, make a loud noise, and hide, but beavers are passive animals that don't like conflict.

Over the next year, Fairfax and her student group are hoping to continue locating beaver dams, identify the number of beavers in the area, understand their activity in the upper Salinas River, observe beaver activity during droughts, and study water quality.

• The SLO Hotline launched two new services as a response to an increased need for mental health services during the challenges of the global pandemic. For the first time, the SLO Hotline will offer a brief therapy clinic, providing short-term therapy sessions once a week for 10 to 12 weeks. The pilot program is available for clients who are underinsured, and it accepts clients without a current therapist or psychiatrist. The hotline is also launching a new texting service, available Monday through Friday from 10 a.m. to 2 p.m. The service uses the same phone number as the SLO Hotline, (805) 783-0607. To contact the 24/7 crisis and mental health guidance hotline call (805) 783-0607, and for more information about all services, email Ileara Brown at ibrown@t-mha.org. Δ