For recreational fishermen on the Central Coast, the beginning of spring usually means the start of rockfish and sport salmon fishing seasons. But this year, due to coronavirus-related safety concerns, SLO County's usually bustling boat launch ramps are empty of hobbyist fishermen and boaters hoping for a catch. 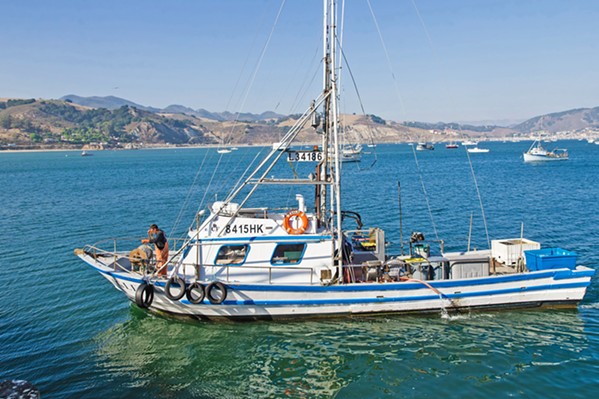 Missy Lintner and her husband run the Port San Luis SportLaunch, a heavily trafficked boat ramp in Avila Beach that actually lifts boats in and out of the water. In a Facebook post published on March 27, the SportLaunch announced that, because of a statewide shelter-at-home order, it would have to close, and just days before the opening of rockfish season on April 1 and salmon season on April 4.

Lintner said this isn't what she wanted the situation to come to, and she doesn't understand why some recreational activities are allowed to continue while others aren't.

"We don't want to be closed," Lintner told New Times. "We're going to feel this for a while. This is a big blow to the business."

Lintner's shipments of bait and tackle for the next two seasons just recently arrived—the shelves and freezers in her shop near the ramp are full—and while the SportLaunch ramp typically launches about 40 to 50 boats a day this time of year, she hasn't had a single boat come through since the March 27 closure.

Commercial fishermen are still allowed out on the water, but Lintner's ramp doesn't usually get much of that business. Plus, she said, it's not just commercial fishing that feeds hungry mouths.

"People rely on this," Lintner told New Times. "This is recreation, but you also get to bring home enough to make tacos for the next two weeks."

That's why Lintner and her husband had been hoping to avoid an all-out closure, and had started enforcing what they saw as a stringent list of social-distancing measures toward the end of March. But then Morro Bay announced plans to close its public launch ramp on March 26, and without that ramp taking some of the opening-day traffic, Lintner said it would be impossible for the SportLaunch to stay open.

"We just kind of have to hope for the best and hope it opens in May," she said.

Spring is a busy time for Morro Bay's public launch ramp, according to Harbor Director Eric Endersby, and the decision to close the ramp came down to public safety.

At the opening of rockfish season, Endersby said the ramp sees about 50 to 60 boats a day on weekdays and even more on weekends. The parking lot has 45 spaces that are always full and overflowing, and with salmon season opening at the same time, the rush would likely be even more intense, Endersby said.

Before the city decided to close the ramp, Morro Bay City Manager Scott Collins said city staff received a number of phone calls from out-of-towners asking whether it would be open at the beginning of April, leading to concerns that the area would be crowded with locals and tourists.

"We realize this creates an inconvenience for boaters," Collins wrote in an email to New Times. "We have spoken with several of them and explained the rationale for the closure. While they don't necessarily agree with the decision, many of them did state they understand why we took that action."

Commercial fishermen like Tom Hafer, who called New Times from his boat on April 1, the sound of seagulls funneling through the phone, are still allowed to work. But Hafer said with restaurants closed, no one is buying fresh fish. So for now, he's freezing most of what he catches.

"This really threw a stick in the spokes here for everyone," Hafer said. "We don't know when we're going to come out of this thing."

But, Hafer said, a lot of commercial fishers have equipment and traps in the water they have to tend to.