A week after rejecting pleas from the cannabis industry, the San Luis Obispo County Board of Supervisors reversed course on Dec. 17 and will now consider extending a policy that allows growers who are in the middle of the county's permit application process to continue operating.

The board's 3-2 vote came after a flood of cannabis industry members spoke during the meeting's general public comment period, imploring—and at times demanding—that the county extend what's called the "abeyance" resolution. Thirty-four grows fall under the policy, according to the county. 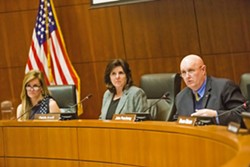 Workers who addressed the supervisors ranged from business owners and executives to investors, managers, and farm laborers. Some workers spoke in Spanish, asking the board to save their jobs.

"There are people in this room who are going to lose their jobs if this is not extended. ... There are real, human costs to these decisions," said Nick Andre, chief operating officer for Natural Healing Center, which has a dispensary in Grover Beach and several cultivation sites.

"It's outrageous," added Eric Powers, co-founder of Megan's Organic Market. "You're expelling them from the workforce. We've all been working really hard trying to get these projects approved."

On Dec. 10, the Board of Supervisors voted 2-2 (without 1st District Supervisor John Peschong) against agendizing a discussion on an extension. The tie meant it didn't pass. The abeyance policy was set to expire on Dec. 31.

Peschong proved to be the deciding vote to change course on Dec. 17, despite facing pressure from anti-cannabis constituents in his district, including his election opponent Stephanie Shakofsky. Peschong sided with 3rd District Supervisor Adam Hill and 2nd District Supervisor Bruce Gibson to agendize a discussion for Jan. 14 on the issue.

"I want everybody to be employed," Compton said, "but people have to get into compliance at some point. You're basically asking us to look the other way."

As part of the majority's motion, the board directed county staff and the SLO County Sheriff's Office to try to ferret out which growers protected by the abeyance were "good" or "bad" actors.

Sheriff Ian Parkinson said that some growers have used the policy as a "cover of darkness" and haven't worked in good faith toward becoming legally compliant.

"We need to clean them out," Parkinson said. "I'd hope the board is focused on only discussing continuing this abeyance for the people who are following the rules."

Peschong, Hill, and Gibson appeared to concur with Parkinson.

"I think we need to be able to figure that out and adjust the abeyance to that," Peschong said.

While the meeting was dominated by those in support of the cannabis industry, a few residents spoke in opposition to extending the abeyance.

Diane Moody, a Huasna Valley resident, said she and her neighbors have lived next to a "problematic" cannabis grower for three years.

"My question is, how many more times will there be extensions? How many more years will we have to deal with problematic grows?" she asked.

Jim Wortner, of Creston, reminded the board that many county residents are opposed to having the cannabis industry in their communities.

"We don't want you there," Wortner said to the room. "Enough is enough on these special favors to Big Cannabis." Δ