San Luis Obispo County's three candidates for clerk-recorder on the June 7 primary election ballot each come from different backgrounds, hold different views about the problem (or non-problem) of election fraud, and have different ideas for the county department. 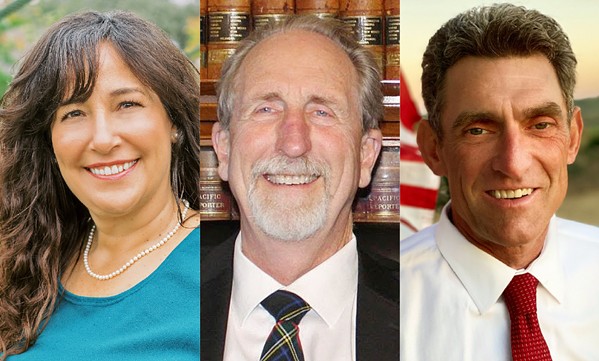 But all three agreed on one thing: Voter confidence in elections has suffered in recent years. And whoever wins the clerk-recorder race this year will confront the challenge of building back public trust while maintaining a nonpartisan attitude.

In Stew Jenkins' mind, preparation for his county clerk-recorder run began in 1971. That year the voting age dropped from 21 to 18, and Jenkins, who was 19 at the time, signed up to become a deputy registrar of voters in SLO County.

"The first place I registered [voters] was San Miguel," Jenkins recalled. "You know, our county is three times the geographic size of Rhode Island; there are significant differences in occupation, attitude, and history. So that was really good for a young person, to go meet people and understand them."

That experience marked the start of what would be a long, "civically active" career in local politics and the law, as Jenkins put it. When the position opened up last year, Jenkins had been contemplating the next phase of his life in the wake of his father's passing.

"I realized that virtually my whole life has prepared to me to do the job at this time, the way the people of the county of SLO need that job done," Jenkins said.

With a slogan of "honest elections you can trust," Jenkins is quick to talk about the crisis of public trust in elections. In his view, voters have legitimate reasons to be concerned about election integrity, citing knowledge of alleged instances where some individual voters received multiple ballots.

"If you have a whole significant number of people who have received more than one ballot—and I know that that is happening—that tears down trust," Jenkins said. "Those are the kinds of things where you have to have a person in the office who pays attention to those kinds of issues, and investigates."

Jenkins served as a Port San Luis Harbor District commissioner in the 1980s and made a run for state Assembly in 2004. He's had active stints in the local Democratic Party, and helped jumpstart the local chapter of the ACLU.

In his private law practice, Jenkins sued the city of SLO in 2012 over its enforcement of anti-car-camping laws on behalf of homeless people and, in 2020, he sued the state for allowing highway billboards to advertise cannabis products.

In general, Jenkins said that SLO County government is disengaged from the public, and he promised to make more frequent connections with constituents if elected.

He also promised to open three satellite offices if elected—in the North County, North Coast, and South County (by increasing the budget or reallocating resources); establish a nonpartisan citizens redistricting commission; and reinstate the deputy registrar of voters program.

'Just be open and transparent'

U.S. Army veteran, military consultant, and Paso Robles resident James Baugh volunteered as a local precinct worker during the November 2020 and the 2021 gubernatorial recall elections. As part of that experience, Baugh claimed he encountered some voting scenarios that made him scratch his head.

"We kept getting people showing up holding up their mail-in ballots, and then we'd look in the computer and look them up, and they're red-lighted, saying they already voted," Baugh said.

At the urging of some friends, Baugh decided to make a run for SLO County clerk-recorder. Touting his years of experience managing military training operations at Fort Hunter Liggett, he said he has what it takes to lead the clerk-recorder's office and build trust with the public.

Baugh compared deteriorating trust in U.S. elections to his experience in Iraq during the 2003 invasion, where he said the military worked with Iraqis to establish trust in the validity of their elections.

While he lacks direct experience in city or county government, Baugh said he thinks he can learn on the job. One of his childhood friends is the clerk-recorder in another California county, and he's consulted him about what's in store.

"He said look, when you go into this job, you're not going to know everybody's job," he said. "The point of a leader is to go look and assess, and bring in people, and say what do you see? What do you want to do? I'll tell you what I see, and go back and forth. That's Leadership 101, and I've done it all my life."

Baugh isn't shy about the fact that he's a Republican, and he recently received the SLO County Republican Party's endorsement. But he noted that he knows the position is nonpartisan.

"I may be a Republican, but if a Republican runs and loses under my watch, I'll tell you, you need to get a better candidate," Baugh said.

Building on a career

Long before she replaced Tommy Gong as SLO County's clerk-recorder last year, Elaina Cano looked up to that office as a young SLO city clerk in the mid-2000s.

Admiring the strong leadership of then-Clerk-Recorder Julie Rodewald, Cano knew right away that she wanted her clerking career to go through SLO County.

"I'd walk in there, and I loved how it made me feel," Cano told New Times. "That staff was incredible and I'd tell her [Rodewald] all the time, 'Let me clean the bathrooms, anything. I want to be a part of this team.'"

Before Cano got there, she worked in SLO and Pismo Beach city clerk's offices. When she finally did land a job at SLO County, it was as a deputy under Gong, who'd by then replaced a retired Rodewald.

"I think he did an adequate job. I think he did OK," Cano said of Gong. "I think one of the biggest challenges for Tommy was taking that leadership role and not being Julie, and not having those same leadership tendencies."

Looking for a change, Cano left SLO County in 2019 to become an election division manager in Santa Barbara County. Describing that clerk-recorder office as "a well-oiled machine," Cano said she was "a sponge" in Santa Barbara "just soaking it all in."

"I learned so much down there," she said.

When Gong left SLO County last year, Cano jumped at the chance to apply for the top position. She got the job, although not without some controversy over the Board of Supervisors' appointment process. Despite the tension, Cano said she's remained laser-focused on her work.

"It's like I never left, really, because of the support I get from the staff and the organization itself," Cano said. "They are just the hardest working staff."

As she gears up for the election in June, Cano is clear-eyed about the climate of mistrust surrounding elections. She admitted she's still adjusting to the reality that a county clerk's job now involves confronting perceptions of rampant election fraud or misconduct.

"It is certainly a huge challenge. It's uncomfortable. It's not in my character to be front and center," Cano said. "But I don't shy away from it. It's those people I like to talk to. It's those people who I'm out and about speaking to: 'Tell me what you think is happening and I will let you know why it's not happening.'"

When it comes to the issue of individual voters receiving multiple ballots, Cano said that it can happen on occasion, like when a voter makes a change to their name or address. But the elections office has safeguards to ensure that only one ballot is counted, she said. The first ballot submitted by any voter gets counted—any others after that are flagged.

Without going into specifics, Cano said that she has already spoken to several local groups and organizations to hear their concerns about election integrity. Those talks have been productive, she said.

"I've been in situations where I thought, 'Oh my goodness perhaps I shouldn't be here,' and I've left there completely surprised," she said. "I'm not hopeless that this can't be turned around."

As far as engaging with election skepticism, Cano added: "It's what we should've been doing all along. It's my job. I'm a public servant. I wholeheartedly love what I do."

If elected, Cano said she will seek more funding from the Board of Supervisors for the clerk-recorder's office, reopen its satellite office in Atascadero, and support her staff with more training and professional development opportunities. Δ