Gong, the elected clerk-recorder since 2015, is leaving for a deputy clerk position in Contra Costa County. His last day in SLO County will be July 2. 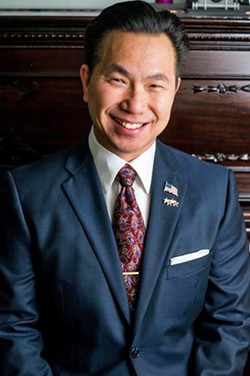 His exit comes just a month after dozens of Republican Party members criticized Gong's handling of the November 2020 election, echoing unsubstantiated fraud allegations by former President Donald Trump, with one citizen musing that Gong, who's Asian American, may belong to the Chinese Communist Party.

Gong said in a June 4 press release that his new job will bring him closer to his elderly parents in the Bay Area, but he later told the The Tribune that the accusations and racist remark "probably played a factor" in the decision.

Commenters on June 9 demanded that the SLO County Board of Supervisors appoint a nonpartisan official to take Gong's post.

"Tommy Gong was run off and we don't want any more of that nefarious, ugly behavior," said Darlene Tunney of Shell Beach. "We want [a] nonpartisan [replacement], and we are watching."

According to 2nd District Supervisor Bruce Gibson, the Board of Supervisors is responsible for appointing a new interim clerk-recorder in "a reasonable amount of time." Until then, Gong's duties will fall to the office's two deputy clerks.

"I think it's better we do appoint somebody," Gibson said. "I know both our deputies are highly capable."

Gibson said that he expects the board to discuss the position at its June 22 meeting. He added that the public is right to be concerned about who gets appointed to the post.

"We have two supervisors who still refuse to speak up in defense of Tommy and the integrity of our election. We have three supervisors who have proposed changes to our legislative platform to advocate for things that are clearly voter suppression. I think there's a reasonable question," Gibson said.

Gong's departure leaves a leadership vacuum in the clerk's office at a challenging juncture for California election administrators, according to former SLO County Clerk-Recorder Julie Rodewald.

With a governor recall election coming this fall, and redistricting and two elections looming in 2022, county election offices have challenging, complex tasks ahead.

"There's never a good time [to lose a clerk], but there are some pretty critical projects coming up," Rodewald said. "Knowing the deputies and other people in the clerk-recorder's office, I'm confident they'll rise to the challenge.

Rodewald underscored the importance of having an "extremely nonpartisan" election official in SLO County, and added that this community had that in Gong.

"It's disappointing to see those kinds of attacks that I think were unwarranted," she said. "It's unfortunately not isolated to our county. It's happening all over the U.S. It really strikes home when you see it happen to people you know, knowing how hard the employees and the county clerk-recorder work." Δ