SLO County's once big plans for cleaning up the illegal activity and trash at Pirate's Cove have been reduced to the simple solution of closing the parking lot to cars from 10 p.m. to 6 a.m. The big question is: Will the California Coastal Commission let them do it? 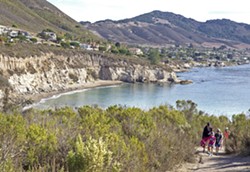 There are other items on the cleanup agenda, too, such as installing trash cans and bathrooms, grading the parking lot, and doing a regular trash pickup, according to SLO County Director of Parks and Recreation Nick Franco. But the potential sticking point is the parking lot closure.

"Whatever we move forward with will likely be appealed to the Coastal Commission," Franco said. "How can we approach this in a way that they might be supportive?"

Central Coast District Director Dan Carl shared a similar sentiment via email, saying that everyone understands the issues and that county and commission staff members are working together to identify the steps they can take "to help curtail inappropriate activities at the Pirate's Cove parking lot in a way that can foster and improve the ability of the general public to enjoy the site and feel safe doing it."

The issues both parties are trying to curtail—criminal activities such as prostitution and drug use, trash such as used hypodermic needles and human feces—are the same ones that have plagued the relatively undeveloped 2,000 feet of coastline since before the county's attempt to address things in 2014. That previous plan included plans to grade and pave the Cave Landing parking lot, close the site at night, install picnic tables and restrooms, and improve the trails.

The Coastal Commission denied the bulk of that project in 2014, citing its mission to preserve coastal access and the idea that development of the cove would alter it.

In 2014, the proposed solutions were too much, Franco said, and now the county has a better understanding of what that means. Then, the proposal was to close down the whole area from 10 p.m. to 6 a.m., and what's being discussed now has one subtle difference.

"It's not that we don't want people out there, it's that we don't want cars out there. So let's not close the area to people; let's close it to cars," Franco said. "Our approach in 2014 was to develop a park, and I don't think the public wanted a park out there. Our focus is to maintain that natural character, and we just put in the minimal requirements."

But closing the parking lot is most likely still going to be a tough sell to the Coastal Commission, he said. Franco, who's spent 30 years working and managing parks along the California coast, said he believes the only way to get things under control at Pirate's Cove is to prevent cars from accessing the parking lot after dark. It would make it a lot tougher for people to cart in drugs and kegs and engage in illegal activities from the comfort of a dark car in a remote parking lot.

Franco points to a decision the commission made earlier this year as a possible sign that the county could get approval. In June, the Coastal Commission approved a similar parking lot closure at Mad River Beach County Park in Humboldt County.

If closing the parking lot won't work, Franco said, the county has two other options: to step up enforcement activities by assigning more deputies/park rangers to the area (at an additional annual cost to the county) or to sell the property.

The Pirate's Cove discussion is scheduled to go back before the Board of Supervisors on Dec. 5. Δ