SLO County condemns Los Osos home after it was vandalized

Los Osos resident Hilary Roberts Grant remembers the day she decided that she had to do something about an abandoned, unmaintained house across the street. She said the house on 13th Street had been unoccupied and untouched for years with piles of debris in the yard, mold, termites and rats running rampant, and squatters sneaking into the garage.

"It was spring [of 2015], and I knew it wasn't going to rain again for a long time," Grant said. "Knowing that the house was 100 percent wood, I concluded that this was a huge fire hazard." 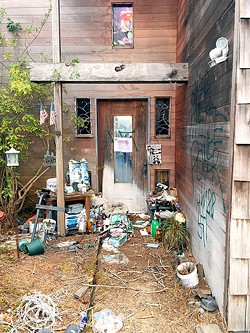 Grant contacted Cal Fire and the SLO County Planning and Building Department in February 2015, and they opened a case on the property. All parties agreed that the house should be fixed up, except the only party that mattered: the owner, John D. Martin II. Martin, who resides in Northern California, eluded contact and showed no interest in cleaning up the house. Neighbors were told that the house didn't present enough of a hazard to be in violation of county code, so the county closed the case in May.

That was before the property was vandalized with swastikas.

On Sept. 28, neighbor Nancy Sayer discovered the abandoned property plastered with spray paint—forest green-colored swastikas and other white power symbols covered the dark wooden walls and a debris-laden red Isuzu parked out front. SLO County condemned the house that day, and the county Sheriff's Office is investigating the crime.

Art Trinidade, SLO County Planning and Building Department's chief investigator, said that the graffiti, a crumbling balcony, and empty beer bottles around house were sufficient proof that the property had become "an attractive nuisance and a public safety issue." Prior to the vandalism, the property's condition was not egregious enough to establish a violation, according to Trinidade.

A Notice of Order was sent to Martin, meaning he has 44 days to, at a minimum, board up his garage—which is considered the weakest point for entry into the house. If he doesn't comply or appeal, Martin can be fined $100 per day, and the county may proceed with a lengthy abatement process.

Neighbors who have watched the property deteriorate over time are losing patience with both the homeowner and the county. Because Los Osos is an unincorporated community without a municipal government and the often-accompanying housing maintenance codes, the county claims to have its hands tied. Thus neighbors like Sayer, who shares a property-line with the house, don't have a choice but to live next to what they consider an eyesore and a safety issue. The night before the graffiti was discovered, Sayer said she heard trespassers enter her yard.

"We've lived with this for 20 years, really," Sayer said. "There should be a minimum standard for housing maintenance. But we can't do anything."

Trinidade emphasized that passing new laws on the county level is arduous because county laws have such a broad geographic jurisdiction.

"When we try to pass countywide laws, we're passing it for 13 unincorporated communities," Trinidade said. "We have to weigh everybody's ideas about it. Passing a property maintenance ordinance may play really well in a Cambria or a Los Osos, but it would be looked at with a lot of suspicion out in the middle of the California Valley."

Los Osos residents will have to continue to tolerate the house until the owner responds to the order or the county moves forward with abatement. But even if his office took the issue to the Board of Supervisors, Trinidade said the review process for abatement would take "several months."

New Times was unable to reach Martin, who has two Bay Area properties also listed under his name.