On Jan. 28 at 6 a.m., volunteers gather in the main room of 40 Prado to participate in the biennial homeless Point In Time Count and survey.

A four-person group made up of two guides (homeless individuals) and two volunteers are assigned a section of the city of San Luis Obispo to conduct the survey. 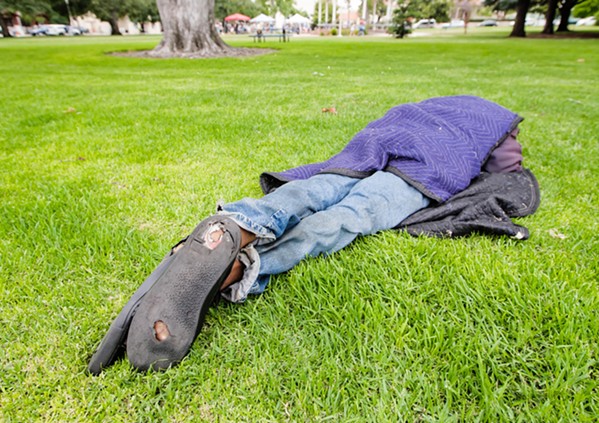 My group is given Marsh Street to Capitolio Way, and we decide to split up into groups of two. My partner, Jorge Gonzalez, is experiencing homelessness for the first time.

It's been a year since Gonzalez was married, caring for his son, working and living in Monterey County. But a divorce left him with little money.

"I didn't want to be in that area anymore so with what I had, I got a ticket, hopped on a bus, and came to the nearest place," Gonzalez said.

As we walk up and down the streets, we pause to look behind and between buildings, and in large sections of shrubbery. He points out these areas because he said he's slept in similar places.

We see a man sleeping on the sidewalk, his belongings covered by a dingy comforter. We count him on our sheet: male, mid-40s, and on the street.

Gonzalez has only been homeless for a year. He's currently working for 40 Prado—he and the other guides are getting paid $15 an hour plus the time spent on training—and saving up to rent a place of his own again.

"People think that because you're homeless it's because of drugs or because you want to be, but that's not all of us," he said.

Peter Connery, vice president of Applied Survey Research, assisted SLO County Department of Social Services with the planning and execution of the count.

Connery said the visual count and questionnaire survey helps the department understand what services might be needed.

"Statically, it's hard to measure the survey's accuracy because you don't have the money to do controlled studies, that's just the general problem with homelessness research," he said.

For Connery the rewarding part about connecting volunteers with people experiencing homelessness is the relationships that are made.

"I can't tell you how many routes have ended with the volunteer getting a cup of coffee with the guide," he said. Δ