Smart's body has yet to be located. 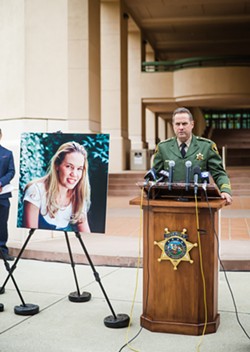 On the morning of April 13, Paul, 44, was taken into custody at his residence in San Pedro and Ruben, 80, in Arroyo Grande.

At a press conference on April 14, SLO County District Attorney Dan Dow announced that his office was charging Paul with first-degree murder. Dow alleged that Paul killed Smart while attempting to rape or raping her. The district attorney alleged that Ruben helped conceal Smart's body after she was murdered.

Both father and son are scheduled to be arraigned in San Luis Obispo Superior Court on April 15.

"As with any criminal case, our investigation is always ongoing up until the very end. Until the case is resolved. So we want to put out today a request for information from the public," Dow said.

The agency is seeking public assistance in providing any information about this case or other potential crimes believed to have been perpetrated by Paul or Ruben, including assaults or other acts.

"Paul Flores was known to frequent bars in the San Pedro area from 2005 to present. Individuals with any information are encouraged to contact San Luis Obispo County Crime Stoppers at (805) 549-7867," Dow said.

In terms of holding the trial in San Luis Obispo County Superior Court, Dow said the court process is designed to pick a fair jury no matter how significant the case is.

"It will be a decision at some future point that a judge will have to make if there are requests to move it to a different venue," he said.

Dow and SLO County Sheriff Ian Parkinson both stated that sealed search warrants served at Ruben's Arroyo Grande home on March 15 and 16 and April 13 don't allow either agency to reveal the evidence they discovered that led to the arrests.

During a press conference on April 13, Parkinson said that forensic physical evidence was located that the Sheriff's Office believed to be linked to Smart's disappearance. 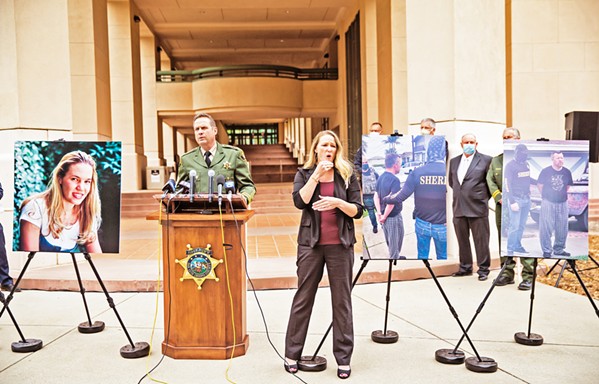 In respone to the arrests, the Smart family released a statement via the Justice for Kristin Smart Facebook page:

"For over 24 years, we have waited for this bittersweet day. It is impossible to put into words what this day means for our family; we pray it is the first step to bringing our daughter home. While Kristin's loving spirit will always live in our hearts, our life without her hugs, laughs, and smiles is a heartache that never abates. The knowledge that a father and son, despite our desperate pleas for help, could have withheld this horrible secret for nearly 25 years, denying us the chance to lay our daughter to rest, is an unrelenting and unforgiving pain. We now put our faith in the justice system and move forward, comforted in the knowledge that Kristin has been held in the hearts of so many and that she has not been forgotten."

The statement thanked Parkinson and his department for their professionalism, compassion, and perseverance and Lambert for his "exceptional skills, indefatigable work, and unselfish dedication." It pointed to indifference and a lack of resolve early in the case that changed when Parkinson took office in 2011.

"The task he and his team accepted was unprecedented in volume and scope, yet they met every setback and challenge with resolve and an unequaled commitment to Kristin and our family," the statement read. "Chris, along with four incredible angels (C, J, J, and J), balanced Kristin on their shoulders while lightening our burden and held our hearts and hopes with fierce resolve and commitment. There simply are 'no words'!" Δ