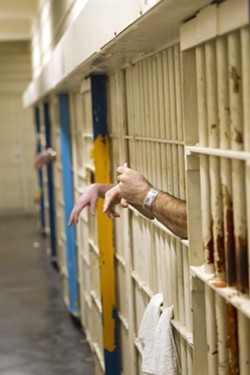 The order, issued by the California Judicial Council on April 6 in response to concerns about virus outbreaks in local jails, set bail at $0 for inmates accused of nonviolent offenses. About 60 SLO County Jail inmates are considered eligible for release under the policy.

District Attorney Dan Dow and Sheriff Ian Parkinson are both opposed to the order, and Dow's office has filed motions in court in the cases of 23 inmates to try to stop their no-bail release. Parkinson has boosted deputy patrols by 75 percent as a response, he said.

Dow told New Times he's concerned about the public safety consequences of the releases and said his office looked at the criminal histories of the inmates to determine whether to formally oppose them.

"I wanted to make sure we were not unwittingly allowing people with a very violent history to get out on zero bail even if their current charge is non-violent," Dow said.

The DA's Office has successfully stopped the release of 10 inmates as of April 15, including of an individual accused of embezzling $5 million and threatening to solicit the murder of one of her victims, Dow said. He added that he believes bail is an important accountability tool in the justice system.

"When someone posts a bond, it doesn't mean they're less dangerous but it does mean they have skin in the game," Dow said.

Not everyone agrees with the stance of the sheriff and DA. Jason Dufurrena, a local public defender, told New Times that the judicial order is meant to protect the constitutional rights and the health of those who are awaiting trials. With all jury trials currently on hold and county jails a lightning rod for COVID-19, Dufurrena said the state got it right by eliminating bail for some inmates.

"The safety of the inmates is important, and we have a prohibition against cruel and unusual punishment," Dufurrena said. "People who are paying attention to the pathologists and epidemiologists, they're saying, 'Hey, close concentrations like jail and things like that are going to become super transmitters.' They're an area where one ill person has the potential to infect hundreds of people."

Parkinson and Dow said they believe the SLO County Jail has proper protocols in place—like quarantining all new inmates—to prevent an outbreak. The jail had no reported COVID-19 cases as of press time. Dow also noted that the sheriff's and DA's offices recently coordinated to commute the sentences of five inmates who were considered at-risk for COVID-19.

"We had already taken care of, in my opinion, that concern," Dow said. "[The judicial order] was solving a problem that does not exist here." Δ