A number of local school districts are preparing to bring some students back in the coming weeks as a result of San Luis Obispo County's declining cases of COVID-19 and new state and federal reopening guidelines for schools. 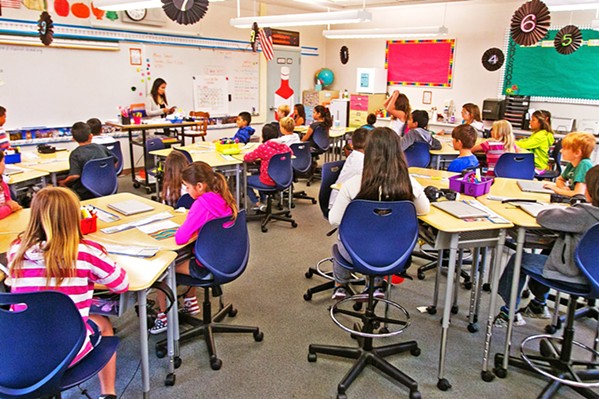 "I would say as a parent, as a public health professional, I'm very excited by the opportunity for all students in this county to have in-person instruction if it meets their needs," Public Health Officer Penny Borenstein said at a press briefing on Feb. 17. "There are many for whom virtual instruction has been very problematic and really held back some students in their educational advancement. I have consistently said through this pandemic that should be our No. 1 priority, is getting students in schools."

But SLO County still has to get into the red tier and stay there for five consecutive days before middle and high school students are allowed to return to their in-person classrooms. Although the county nearly qualified for the red tier earlier in February, Borenstein said a spike in the positivity rate among disproportionately impacted populations halted that progress.

"With schools, it used to be you had to be in the red tier for two weeks to be able to move forward," Borenstien said at the briefing. "It's now five days with a plan in place."

At a meeting on Feb. 16, the San Luis Coastal Unified School District Board of Education approved plans to begin reopening its schools for in-person instruction in early March. Kindergarteners, first-, and second-graders whose families opt for in-person instruction will return to school on March 4, according to an informational message sent to parents on Feb. 17, followed by third- through sixth-graders on March 8.

Elementary schools will start things off with a split-day hybrid model, where half of the district's students attend in-person classes in the morning and finish the afternoon online. The other half of students will have the opposite schedule in an effort to limit person-to-person contact. Fridays will be virtual days for all students, according to the district.

San Luis Coastal could also get middle and high school students back into their classrooms as early as March 15 if SLO County meets the necessary coronavirus metrics.

Lucia Mar Unified School District recently approved similar plans, according to Amy Jacobs, a district spokesperson. Because the county's case rate remained below 25 cases per 100,000 residents through Feb. 23, Lucia Mar welcomed back preschool and kindergarten students on Feb. 24 through a hybrid model similar to San Luis Coastal's. First-, second-, and third-graders will likely be back on March 1, followed by fourth-, fifth-, and sixth-graders on March 8.

A majority of elementary school students in Paso Robles have been back in school since November 2020, according to Deputy Superintendent Jen Gaviola. Gaviola said roughly 78 percent of Paso Robles Unified School District's K-5 families opted in to some in-person classes before the biggest holiday surges at the end of 2020.

Gaviola said her district has had several classroom closures due to cases of COVID-19 and one full school closure. Still, she said, those measures were taken out of an abundance of caution. Paso Robles has around 800 staff and 6,500 students, and there have been 47 positive cases among staff in the last year. Only a few of those were considered cases of in-school transmission.

Now Paso is preparing to bring back its sixth-graders at the beginning of March, according to Paso Robles Superintendent Curt Dubost

"We believe the science shows that it is safe to reopen without a doubt," Dubost told New Times. Δ