Editor's Note: SLO County employees interviewed for this story were granted anonymity by New Times due to fear of retaliation.

The San Luis Obispo County Government Center shutters at 5 p.m., but many of its services don't.

Social workers remain on call all night to respond to reports of child abuse and domestic violence. Utility workers stand ready to be dispatched to fix a water line break, road issue, or flooding problem.

But under a new contract, recently imposed on more than half of SLO County's roughly 3,000 employees, compensation for these shifts has been dramatically reduced, according to workers and union leaders. 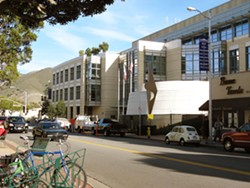 The hourly rate to be on standby increased from $2.75 to $3—but the wages paid when employees are actually engaged in an emergency call were essentially cut in half, they say. The result is a workforce far less inclined to volunteer their private time for public good.

"Everybody's just been dropping out like flies," said a county employee in Child Welfare Services. "The shifts are 15, 16 hours, and your stomach is in anxiety mode wondering what's going to happen. At 2 a.m. the police call, and now you're dressed and out of the house and still expected to be at your job at 8 a.m. ... I want to do it for the kids, but the money is just not worth it."

Reduced pay for standby shifts is just one of the issues that the SLO County Employees' Association (SLOCEA) has with its new 2018-19 contract, imposed on the 1,737-member union by the Board of Supervisors on Oct. 16 amid a negotiations stalemate. Another is salary. While the SLOCEA asked for a 3 percent raise—which was backed by an impartial fact finder—the county refused to budge from a final offer of a 0.5 percent raise in 2018-19 and a 2 percent raise in 2019-20, arguing financial limitations.

When SLOCEA membership voted to reject that offer, the county declared an impasse and implemented the contract.

Now, officials are working to avert a full-blown labor strike, which could empty out its workforce in the public services, supervisor, clerical, and trade units. Staffers who spoke with New Times said union leaders are currently collecting employee signatures in preparation for a strike.

"That's where it's headed," said a Social Services employee.

At the core of the dispute is, of course, money. The SLOCEA claims the county has plenty of it while the county asserts otherwise—citing expensive initiatives, like reforms at the county jail, and a murky overall fiscal future.

Independent fact finders in the labor dispute have told the county to pony up. In a July 31 report, arbitrator R. Douglas Collins stated: "Here the county has not asserted an inability to meet the association's request for a 3 percent across-the-board salary increase. Rather, the evidence establishes that the county is in a very strong financial position as compared to many public agencies in California."

The analysis also found that SLO employees are paid between 10 and 18 percent less than workers at comparable agencies.

SLOCEA General Manager Pat McNamara told New Times that its members willingly made sacrifices during the lean years of the 2010 recession—but they're refusing to accept them at this juncture. He confirmed the union is exploring a strike.

"In past years when economics weren't so good, there was a lot of patience there. The patience has worn out," McNamara said.

But county officials rebut that the economics are still dicey, and point out they're contributing more to employee health care plans in the new contract.

"The central fact underlying these negotiations is that the county's elected Board of Supervisors determined, given an unexpected structural budget deficit and numerous other financial uncertainties, that it is necessary and appropriate to 'tap the brakes' on salary increases for one year," an official county dissent to the fact finding stated.

Supervisors voted unanimously to impose the first year of the contract on Oct. 16. Second District Supervisor Bruce Gibson told New Times, "I don't like to do employee relations this way, but in this instance I felt it was necessary."

"As we get past the recession, employees told me they're expecting salary increases. I get that. ... It's expensive to live here," Gibson said. "At the same time, we have hit another difficult budget patch here. Revenues have flattened out, our costs of providing services have gone up, plus we've had to address some things like the jail medical. I hope we can get SLOCEA units back to the table soon."

The majority of SLOCEA employees aren't buying it. Between the marginal wage increase and new formula for standby compensation, one Social Services worker called the contract a pay cut.

"It's more than just we got an insulting amount of a raise; it's really we didn't get that. We got a cut," the staffer said.

"It's just bad," said another. "The morale is low for all of the social workers. ... This is our families, our money, and our jobs we're talking about. And they're just like, 'whatever.'" Δ