It's awfully quiet outside. But SLO County farmers have not stopped the plows.

Checking in with our local food growers, many reported a huge increase in CSA boxes, meat boxes, and farm stand sales. Others—producers of luxury food items like organic olive oil—found their online and storefront food traffic came to a halt. Local growers are making the necessary adjustments during the COVID-19 pandemic. If you think about it, farmers are always reinventing themselves—they either have the weather on their side, or not.

Jerry Rutiz, owner of Rutiz Family Farms in Arroyo Grande, said it's been chaotic since the shelter-in-place orders began. He said he sells 95 percent of his organic produce through his food stand on The Pike, serving mostly people who live within a 5-mile radius. He sells to a handful of restaurants such as Ember, Spoon Trade, and Apple Farm, and runs a Friday pickup for CSA box subscribers, which has become more popular recently, especially with seniors.

"People seemed like they were buying lots of stuff," Rutiz said about the week of March 16.

In addition to his produce, people can also buy See Canyon fruit, bakery bread, and locally ranched beef, chicken, and pork at his stand.

To keep cross contamination from happening, Rutiz said he eliminated self-service, placing all his produce behind a table. One of his staff, in gloves, was taking orders and packing the veggies in a box for the customer, while the money station was manned by another staff person. Rutiz has always only taken cash or check, but he cut the coins out of the equation when he heard that coins carry more germs than bills.

Rutiz said his biggest worry right now is health. The 63-year-old farmer said he checks in with his staff regularly to see if they are feeling OK.

"If they're at a point when they start getting sick ... we will stop. We can't do anything ... and if that time comes, then there's nothing that we can do," he said.

Rutiz mentioned one of his blueberry partners had to stop delivering because his workers had to stay home with their kids, who need supervision at home due to school closures.

At Talley Farms in Arroyo Grande, Box Program Manager Andrea Chavez has been seeing a spike in the number of customers who signed up for their farm box program. She said last week that people are still signing up.

"We're seeing a big increase in older customers wanting boxes delivered to their home versus picking up at one of our 70 pick up locations," Chavez said. "The wholesale side of our farm is business as usual, with some of our older office employees working from home. Our sales to food service accounts are slower, but sales to our retail accounts are strong."

Chavez said their packing crew started at 6 a.m. rather than 6:30 a.m., and they've been using more trucks to make home deliveries. Some of their pickup locations have changed, as gyms and other businesses close, so customers are being notified by email.

Chavez said people are buying their produce all at once right now, noting that grocery store produce shelves are light in supplies as more people are cooking at home and "perhaps realizing they need to eat healthier."

Tessa Varia—daughter of Antonio Varia, beloved chef and owner of Buona Tavola Restaurant and Alle-Pia Fine Cured Meats—said that as of March 18, their handcrafted salami emporium in Atascadero would stay open 9 a.m. to 4 p.m.

"It's slowed down quite a bit, but we've changed it," said Varia calmly. "We're still making sure that we're out there."

Rancher Will Woolley of Templeton Beef, said his operation was "off the rails, crazy busy" amid the state and county coronavirus mandates. They have a good supply of ground beef, but you'll need to call in your order rather than use the online portal. Woolley still will deliver the beef boxes all over SLO County, but instead of one pack per customer, it's 10 pounds of beef at a time. 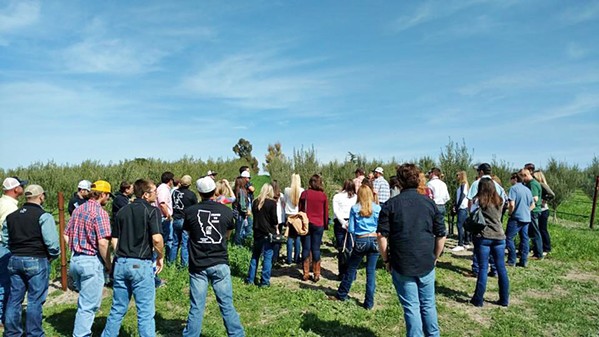 Bautista Family Farms decided to go with the flow, opening up a grab-and-go pre-made produce box from their stand in Arroyo Grande. Each box, $20, can be picked up Tuesdays and Thursdays, 9 to 11 a.m. and 4 to 6 p.m., and Saturdays from 9 a.m. to noon.

Bee Wench Farm in Shandon sold out of pasture-raised chicken the week of March 16. As soon as Sarah Worley posted her inventory online, she sold out in less than an hour. She urges everyone to check the online inventory for deliveries of eggs, meat, and bone broth.

"Our business has seen a huge influx in new sign-ups in the past three days."

Hill's delivery service of Central Coast grown harvests has always been an online service that delivers directly to customers.

But some farm businesses have come to a grinding halt. Karen Tallent, president and farmer of The Groves on 41 in Templeton, was just granted a farm stand permit last month. Because of coronavirus cautions, they haven't been able to open for olive oil tasting and tours. Though they're accepting online orders and some locals are picking up drive-thru style, Tallent said their small farm tourism is "certainly suffering, so re-orders are pretty scant right now."

"We're a bit of a luxury product," Tallent said. "Seems by the looks of the grocery stores, people are more interested in toilet paper, sanitizers, and canned food."

But despite the challenges, Tallent said, "We are deeply grateful for the sensibility and manners exhibited by folks out running their necessary errands."

On March 19, the state issued an executive order telling all Californians to shelter at home, meaning only essential government functions will continue, while essential businesses, such as farmers' markets, are encouraged to remain open. However, as of March 13, SLO downtown farmers' market has been canceled until April.

Market organizers ask the public to practice social distancing, let the farmers get your product for you, and stay home if you are sick.

Here are the locations and hours of the farmers' markets near you:

For up-to-date information on the markets, visit their Facebook pages; their websites: slocountyfarmers.org, readyslo.org, pinterest.com/slocorarmers; and Instagram pages: @northcountyfarmersmarkets and @farmersmarketsofslo. Δ