The San Luis Obispo Regional SWAT team responded to a call about an armed man that ended in the death of the suspect—the fifth officer-involved shooting in the county since January 2020. 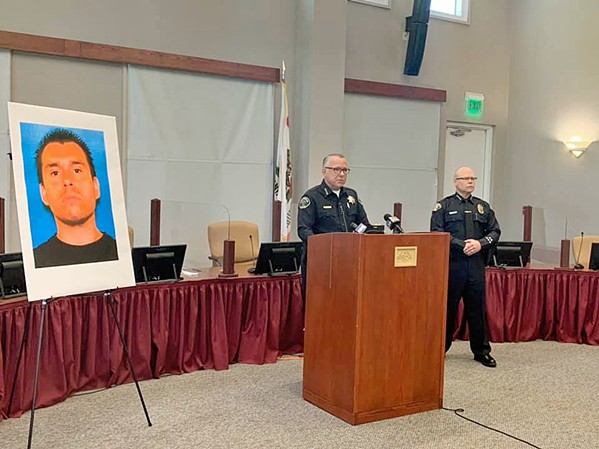 The suspect, 32-years-old Los Angeles resident Steven Adam Calderon, had barricaded himself in a Paso Robles apartment off of Branch Creek Circle and fired at officers.

According to a Paso Robles Police Department press release, officers responded to the scene on July 5 at 4 p.m. after a man "discharged a firearm from the balcony of an apartment." The suspect also allegedly pointed the same gun at his girlfriend and threatened to shoot her, according to the release.

During a press conference, Paso Robles Police Chief Ty Lewis said that when the department's patrol units initially responded to the scene, officers tried to establish contact with Calderon, however the attempts were unsuccessful.

"It appeared that he would come in and out of the residence and yell various things at the officers. Ultimately, [the officers] observed the gun that was observed by witnesses and this turned into a high risk encounter for the police and the community," Lewis said.

Lewis then called in the SWAT team to assist.

"Unfortunately communications throughout the night didn't prove fruitful. We used a crisis negotiations team to try and establish contact with Mr. Calderon, which he refused," he said.

The officers tried different tactics throughout the night to no avail. Calderon would emerge from the apartment periodically and fire several shots at law enforcement officers—no officers were injured. The following morning, July 6, the SWAT team deployed tear gas and different chemical agents in the apartment.

At 1:15 a.m., Calderon emerged from the apartment and eventually set the gun down on a nearby porch, engaging in dialogue with the SWAT team. At one point he lunged for the gun, Lewis said, and was fatally shot by the SWAT team.

"For us, the message to the community is that none of the people at the apartments were injured, none of our officers were injured. Thank God, especially in the wake of the tragedy that occurred recently in San Luis Obispo, and so the community is safe. Unfortunately, we also have Mr. Calderon that is deceased, and it's not lost upon us that a mother and father lost a child," Lewis said. "We did everything we could to get Mr. Calderon to surrender peacefully, but that didn't happen."

Following the incident, two Paso Robles police officers and one San Luis Obispo police officer are on administrative leave as the agencies continue to investigate the circumstances surrounding the shooting.

SLO County has experienced five officer-involved shooting incidents in the last 18 months, including the recent incident that Lewis referred to at his press conference. On May 10, SLO police officers served a search warrant at Eddie Giron's apartment as part of an investigation into a series of commercial burglaries. Giron opened fire, killing SLO Police Det. Luca Benedetti, 37, and injuring Det. Steve Orozco before turning the gun on himself.

In a January 2020 shootout in downtown Paso Robles and the Paso Robles Riverbed between officers and Mason Lira, 26, multiple officers were injured and Lira was killed.

In September 2020, an outstanding warrant on white supremacist 38-year-old Christopher Straub led to him ambushing two deputies in Templeton—one officer was injured and Straub was killed in the crossfire.

In August 2020, 42-year-old Bakersfield resident Scott Huffman fired about 20 rounds outside of the Nipomo Vons shopping center and was killed in crossfire with law enforcement. Δ