When a bill allowing terminally ill Californians access to life-ending medication was signed into law last year, supporters lauded it as a landmark step in allowing patients the right to die with dignity.

But with the law set to go into effect in June, questions about individuals’ ability to access their rights under the legislation have been growing as some of California’s hospitals, including two in SLO County, have chosen to opt out of participating.

Of SLO County’s four major hospitals, not one confirmed that they will allow their doctors to prescribe the life-ending medication to qualified patients under the auspices of the legislation, commonly referred to as the End of Life Options Act. 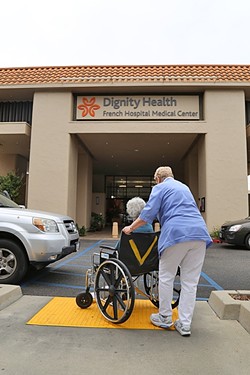 SLO County’s other medical facilities, Dignity Health-operated French Hospital and Arroyo Grande Community Hospital, confirmed that they will opt out of the End of Life Options Act.

“We believe death is a sacred part of life’s journey, and Dignity Health will continue to operate, as the law permits, in accordance with our Statement of Common Values,” a statement from Dignity Health Spokesman Chad Burns read. “This does not include physician aid-in-dying.”

However, the act also allows doctors, health care providers, and pharmacies the right to not participate, prescribe, or fill orders for the lethal dose of drugs.

“The law isn’t prescriptive,” said Jan Emerson, a spokesperson for the California Hospital Association (CHA), which represents more than 400 hospitals and health systems in the state.

Emerson said the CHA wasn’t keeping track of how many of the state’s hospital or health care providers planned to opt out. She noted that some choose to do so because they’re affiliated with religious organizations that don’t believe in physician-assisted suicide. Dignity Health was founded and operated by the Catholic Church until 2012. While there were no references to religion in their statements to New Times or other media outlets, the nonprofit’s core mission statement acknowledges that its values are consistent with its “spiritual foundation” and legacy.

“Death is a sacred part of life’s journey,” Dignity’s Statement of Common Values reads. “We will intentionally neither hasten nor delay it.”

Dignity isn’t the only large provider opting out. Providence Health, a Catholic-based organization that operates six medical centers in the state, is also declining to participate, according to a report in the Los Angeles Times.

Other large health care providers in the state are on board with the new law. Health care giant Kaiser Permanente will participate, offering patients a coordinator to guide them through the process and to help find a doctor who has agreed to participate under the law.

With hospitals, health care providers, doctors, and pharmacies all left to their own determination whether they will provide such a service to terminally ill patients, organizations like California Medical Association (CMA) are seeking to offer guidance. The CMA recently released a 15-page document of the legal requirements and guidelines for implementing the act. The CMA was initially against the law but later changed its stance to neutral. Alicia Wagnon, a spokesperson for the CMA, said that such patients would likely still be able to get access to the process, even if it doesn’t happen in a hospital.

“If you think about the situation in which these requests will be made, it will most likely be a patient talking to a doctor in an office setting,” Wagnon said. “In all likelihood they will be referred by their primary care physician to a specialist.”

Emerson, with CHA, echoed a similar sentiment, and noted that in may cases, the patient will have already been diagnosed and may want to spend their final days at home.

“They are not likely to be hospitalized individuals,” Emerson said.

In the end, it will most likely be the doctors themselves who will determine just how accessible the End of Life Options Act will be for patients in SLO and elsewhere in the state. Just how many will choose to participate and opt out isn’t known; there’s no requirement for them to register with any government agency, leaving only anecdotal indications by organizations like the CHA or CMA.

“Whatever the hospitals do, we feel there will be a sufficient number of physicians in the community who will be willing to participate,” Wagnon said.