A 36-year-old Atascadero man who died of unknown causes in SLO County Jail Jan. 22 had been awaiting a transfer to the county’s lone inpatient psychiatric facility for 12 days, according to court records obtained by New Times.

Andrew Chaylon Holland had a history of violence against police officers and jail staff and appeared to have struggled with mental illness in the years leading up to his death. Holland had been declared mentally incompetent to stand trial three different times, according to court records. 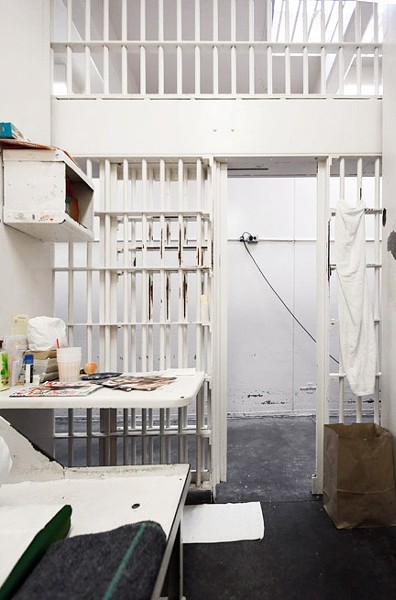 According to the SLO County Sheriff’s Office, Holland, who’d been in custody since September of 2015, was found unresponsive in a glass observation cell where he’d been placed because he’d been striking and injuring himself. Holland was being checked on every 15 minutes and showed no outward signs of trauma. His cause of death is still being investigated, sheriff’s officials said.

Holland was facing criminal charges for misdemeanor battery of a police officer, which were filed against him in SLO County Superior Court in early December 2016. Judge Jacquelyn Duffy declared him mentally incompetent to stand trial on Jan. 10, 2017, and ordered that Holland be moved into the care of SLO County’s psychiatric inpatient unit to receive treatment until he was mentally fit to face the charges against him.

But 12 days later, Holland was still in the county jail. Sheriff’s spokesperson Tony Cipolla said the transfer hadn’t take place because there wasn’t room for Holland at the county’s psychiatric inpatient facility.

“My understanding is the unit was filled, and we were waiting for space to open up,” Cipolla said.

“We are limited in the number of inmates we can bring over from the jail at one time,” Robins said.

While the jail does have some behavioral health and medical staff on site, there isn’t a dedicated mental health or psychiatric unit within it. Cipolla indicated that keeping mentally ill inmates in the jail while waiting for space to open up at facility like the county’s or Atascadero State Hospital was challenging.

“It’s frustrating. We’d like to see the situation changed,” Cipolla said. “When you have people who have obvious mental health issues, they should not be housed in the jail.”

Holland’s years-long contact with the SLO County court, jail, and mental health systems stem from multiple cases of violence against police and correctional staff that occurred while he was both in and out of custody. According to court records, the SLO County District Attorney’s Office filed a total of six cases against Holland involving charges of battery or assault against at least seven peace officers. No fewer than three of those assaults appeared to have occurred while Holland was incarnated in the jail.

“[The court] is advised by jail staff that [Holland] is not doing well in custody,” a note from one of Holland’s cases in 2014 read.

The investigation into Holland’s death is ongoing. An autopsy was scheduled for Jan. 25. Sheriff’s officials said they do not suspect foul play.