On May 21, the SLO County Courthouse was occupied with women and men in pink pussy hats, pink Planned Parenthood T-shirts, purple "Truth to Power" SLO Women's March T-shirts, and signs of all kinds.

"Together we fight for all."

"Keep your laws off our bodies." 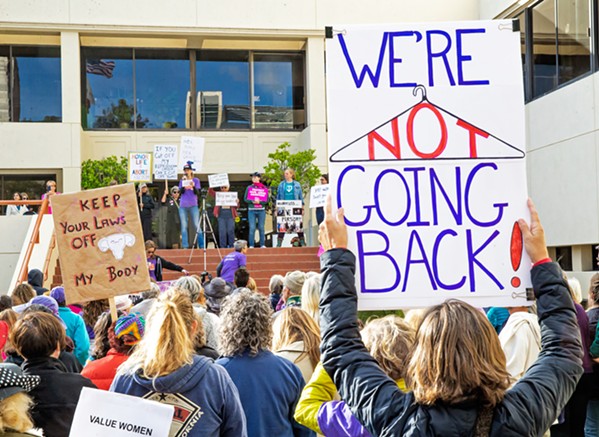 Women's March San Luis Obispo organized a local rally as part of a nationwide day of action calling for a stop to the recent abortion bans and fighting for reproductive rights and access to quality reproductive health care services.

Susan Howe, 85, attended. She said she has always thoroughly believed in the right of a woman to be able to decide for herself if she has to have an abortion.

"I'm so sad and so tired of the fact that we have to go over this over and over again. It makes me disappointed in my country," Howe said.

A restrictive abortion law that was passed in Alabama on May 15 sparked the nationwide rallying effort.

The law makes it a crime for doctors to perform abortions at any stage of pregnancy, unless a woman's life is threatened—there are no exceptions for cases of rape or incest. Under the new law, doctors in the state face felony jail time up to 99 years if convicted.

Dawn Addis, Women's March SLO co-founder, said it was important to organize a local rally because she knows that what's happened in one area of the nation can happen elsewhere.

"The power of the Women's March is that it engages women and allies in local communities across our nation; that's what creates a wave of change. We want our sisters in states where their rights are being affected to know that we stand in solidarity with them," Addis said, "and we also want to be a part of the larger community that is standing up for access to safe and legal medical care for all women."

Addis said that the organization understands that these laws are a direct attack to Roe v. Wade.

"If things change at that level, then absolutely it could have an effect locally. Right now, the laws in California are supportive and are expanding, but that doesn't mean it will always be that way," she said.

In April 2018, Planned Parenthood officials claimed that the organization had to close a satellite clinic in Paso Robles after its partner, Peoples' Self-Help Housing of SLO County, received hostile communications from anti-Planned Parenthood activists.

"These bans affect particularly low-income women, women of color, LGBTQ-plus communities, and groups that are already marginalized. We will not leave them behind," Chmelik said.

There was also a tearful testimony by Ruzena Brar, a local resident, who decided to end a planned and wanted pregnancy in April 2017. She said she received concerning test results informing her and her husband that in the unlikely event that her baby made it to term, her daughter was not going to live very long—only a matter of days or weeks.

"The life she may have had outside of my body would have been one of struggle. We couldn't let her go through that, so we decided to let our baby go," Brar said. "The part of my story that matters to me is that we love our baby, that the first and last parenting choice we made for her was to release her from a broken body. The part of my story that should matter to you is that I had a choice and that access to abortion care is important no matter where you live."

The rally was met with opposition from Danny Ehinger, a member of the Abolitionist Society of SLO County, a pro-life group. Ehinger said he decided to come to the rally because it's important to be a voice for people who don't have a voice and to stand up for his pre-born neighbors.

"It's sad because San Luis Obispo is populated with lots of Christian churches that don't agree with abortion, and it seems like Christians won't come up and stand for what they believe in. I don't want to judge anybody, but I do think that we should take the truth to the streets," he said. Δ