San Luis Obispo County supervisors are getting out ahead of a new state law that, starting next year, would cap how much any one individual or committee could donate to a county candidate in an election cycle at $4,700. 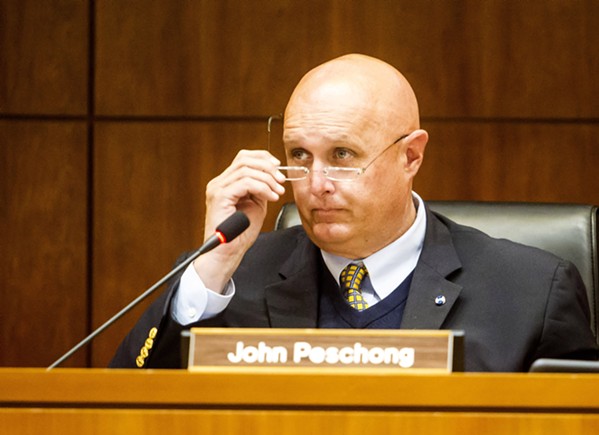 At its Oct. 20 meeting, the Board of Supervisors voted 3-1 to push its own local ordinance that would supplant those state rules and instead set a $25,000 limit for contributors in county races, which include elections for supervisor and offices like the sheriff-coroner and district attorney.

"That's what I'd like to see," said 1st District Supervisor John Peschong, who had asked to put the item on the board's agenda and on Oct. 20 outlined the specific dollar figures for the ordinance.

Under the new state law, Assembly Bill 571, if counties and cities do not have local campaign finance rules in place by Jan. 1, 2021, they default to the limits established for state office candidates—currently set at $4,700 per contributor in an election.

Peschong proposed the local ordinance and cast a vote despite owning a political consulting firm, Meridian Pacific, that has historically worked on local candidate campaigns. Peschong claimed that he does not have a conflict of interest in the matter because he has not worked for county candidates since he took office in 2017.

"I'll continue for the next four years not to work in SLO County," Peschong said.

Second District Supervisor Bruce Gibson dissented in the vote, saying that he would only support local campaign finance rules that set donation limits below the state's.

"One of the things that's broken about our democracy is the amount of money that goes into political campaigns," Gibson said. "I look around and see the amount of that has gone into certain supervisorial campaigns, and I frankly don't think it's a good thing."

Without any ceiling on donations, recent SLO County elections have become well-financed affairs. In the 2020 primary election, the candidates for three supervisor races took in more than $1 million in collective contributions.

In contrast to Gibson, 5th District Supervisor Debbie Arnold endorsed the $25,000 cap, calling it a "very reasonable" number. Arnold argued that because the limits do not apply to independent expenditures, candidates would be at a financial disadvantage if an independent group launched an attack campaign against them.

"Sometimes candidates need to be able to collect [money] to compete with messages that are put out there that may not be accurate," Arnold said.

While 4th District Supervisor Lynn Compton said she felt "conflicted" and "a little uncomfortable" about the proposed $25,000, she voted in the majority, calling the state's limit of $4,700 "a little bit low."

"If we decide it's not working, we can tweak it in the future," Compton said.