County residents and visitors got a closer look at what's developing locally in marine science research on Nov. 17, when Cal Poly opened its private pier in Avila Beach to the public for the first time. About 200 guests attended throughout the day. 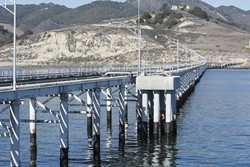 # "It was great day," said Tom Moylan, the pier operations manager. "We had a steady stream of people that were really impressed with the facility, but the comment that I heard most frequently was about the students and how enthusiastic they were and how eager they were to share their knowledge about the things they were studying."

In 2001, the Unocal oil company--which has since been bought by Chevron--donated the 3,000-foot steel and concrete pier to Cal Poly's College of Science and Mathematics for coastal marine science studies. Today, more than 1,300 students and faculty from Cal Poly and Cuesta College use the pier for classes and research.

From collecting information about local rockfish populations to studying anti-fouling techniques in an attempt to discover environmentally friendly ways to prevent mussels and barnacles from growing under boats, the "open house" gave students an opportunity to share their various projects with the public.

Attendees got a chance to explore the pier's buildings and newly completed flowing seawater lab that maintains various marine invertebrates in research tanks.

"We're fortunate to have the resources," Moylan said. "But really it's the students that make it what it is, and I think the public saw that."

Cal Poly plans to open the pier to the public on a quarterly basis, so aspiring marine biologists and scientists--or just people interested to see what's at the other end of the structure jutting out into the water--will have more opportunities to satisfy their curiosity. Moylan added that the university plans to spend millions of dollars to build additional laboratories, research facilities, classrooms, and a public meeting room.

For more information about the Cal Poly Pier, visit www.marine.calpoly.edu, or call 756-2226.