SLO County Public Health lab director retires at 78: 'He brought us into the new century single-handedly'

In 2007, at age 64, Dr. Jim Beebe took over the job of lab director at the San Luis Obispo County Public Health Department—adding a late chapter to an already decorated career, which included serving as the state of Colorado's public health lab director. 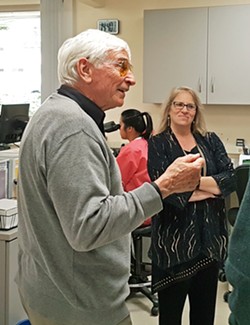 Fifteen years later, Beebe is finally retiring for good—but only after having "single-handedly" led SLO County's lab into the 21st century and helped steer it through a once-a-century pandemic in his late 70s.

Wade Horton, the county's chief administrative officer and emergency services director, choked up talking about Beebe during an April 19 retirement ceremony for him at the Board of Supervisors meeting.

"At the beginning of the pandemic, when we stood up the EOC [emergency operations center], most individuals who were in Dr. Beebe's age group were at home. Dr. Beebe was in the EOC every day," Horton said. "He was counseled, 'Dr. Beebe you are in one of the highest risk groups, you really probably shouldn't be here,' and he consistently put community before self."

In a phone interview with New Times, Beebe said that he was scheduled to retire in early 2020, but decided to put retirement off when the COVID-19 pandemic hit.

"It was the winter of 2019-20 when we heard news of this new virus," Beebe recalled. "I remember my lab manager saying to me, 'I think it's going to be a big one.' ... I couldn't just walk away from it. I had to give [the staff] the support they deserve."

Beebe and his lab confirmed the first case of COVID-19 in SLO County on March 14, 2020. As the virus spread throughout the community, pressure quickly ramped up on the lab, as it became the local hub for testing during the pandemic's initial months.

"March to June 2020 were the tough months," Beebe said. "Because of the supply chain issues, we were doing six different tests. There was a lot of pressure on us. It was difficult."

During the course of the pandemic, Beebe mostly worked from home or in his office, at a distance from lab operations. Even so, Beebe still contracted the delta variant of COVID-19 from a colleague in 2021. Fortunately, he had mild symptoms.

Despite the risks of working in a public health lab during a pandemic at age 77, Beebe said it was worth it just to serve the community and his staff during a challenging time.

While Beebe is retired now, he plans on sticking around as an advisor to the county. It's easy to see why the county still wants him. During his decade-plus tenure as lab director, Beebe is credited with modernizing its technology and methods and expanding its disease-testing capabilities.

"When he came to this laboratory, we were a mid-sized to small county laboratory," SLO County Public Health Officer Penny Borenstein said during Beebe's retirement ceremony. "He brought us from the old century into the new century, single-handedly. We used to do a lot of STDs, but rabies, tuberculosis, anthrax, small pox ... I could go on for 40 different diseases that we now have the capacity to test for."

The lab is also a critical backstop for low-income residents who can't afford private health care or testing, whether it's for tuberculosis or HIV.

"We're picking up those who are less fortunate, who may be victims or spreading diseases," Beebe said.

After arriving in SLO County at age 64 "with a lot of gas in the tank," Beebe, now 78, said he's much more at peace about retiring. You can find him now on the Sea Pines Golf Course or taking a walk in his Los Osos neighborhood.

"I was born in the year that a microbiologist team discovered that DNA was the principle of heredity—so it was obviously getting time," Beebe said. "It was a good run. I can't ask for anything more."