SLO County ranked No. 6 in the U.S. for female owned businesses

A hand-written chalkboard sign behind the front door reads, “We believe that women, like the clothes they wear, are more interesting with a little history behind them.” Change of A Dress Consignment Boutique owner Diana Gabriel greets everyone who walks into her new downtown San Luis Obispo location with warmth and a smile. Previously loved outfits beckon from where they hang on the wall, asking the primarily female customers to give them a new home.

In Los Osos, a yoga studio has a similar customer base. While men do practice, “yoga tends to be more magnetic toward women,” said Brooke West, owner  of Brooke West Yoga.

Though different in what they offer, they have more things in common than just the demographic of their customers. Women own both businesses, and apparently—in addition to being the happiest place in the U.S.A.—San Luis Obispo County is a great place for women to be business owners. 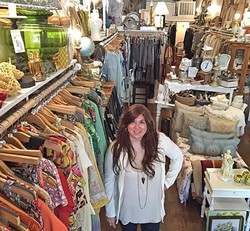 In a recent study published by NerdWallet, the county is the sixth best place in the country for female entrepreneurs and for women to open businesses.

These numbers are encouraging, but there are still difficulties facing entrepreneurial women interested in opening their own small businesses.

According to figures from U.S. Rep. Lois Capps’ office, representing SLO and Santa Barbara counties, women-owned companies have received only 4 percent of the $400 billion federal government contracts awarded to small businesses, and their loan approval rates are 15 to 20 percent lower than for equivalent businesses owned by men. Services and certifications geared specifically for woman-owned small businesses could be due to these disparities.

“Women business leaders are absolutely critical to America’s continued economic success in the 21st century,” Capps said in a statement to New Times. “The Central Coast is home to many wonderful women-owned businesses, and I am proud to support these entrepreneurs.”

California accounts for more than half of the top seven best places for women-owned businesses, according to the NerdWallet study, with SLO ranking even higher than San Francisco. What makes SLO so conducive to lady power?

“This is a captive audience in this little valley [that] we are in,” yoga studio owner West said. “If women have value to offer just as much as men … there’s no choice but to go to a woman-owned business for quality services.”

Chuck Jehle, program director of the Mission Community Services Corporation’s (MCSC) Women’s Business Center, attributes the success to the structural support available in SLO County. The MCSC, funded in part by the Small Business Administration, provides mentoring and consultant services to both men and women to help start and grow their businesses.

West was mentored through the MCSC during the past year with the goal of growing her business. An encouraging climate played a large role in the launch and continues to help the success of her business.

“This is a really social community,” West said, “if we have integrity we are game to support each other. [Women] have really clever ideas. Not that men don’t, but because we are hardwired to have the species survive, we can make those leaps with creativity to offer services with value that are not available yet.”

Consignment boutique owner Gabriel expanded to her new location with the help of a 16-week training program through Women’s Economic Ventures (WEV), a Santa Barbara and Ventura counties-based nonprofit that provides services and loans designed to foster growth for small businesses.

These services that foster small business growth are available for both women and men. But if it’s worth noting that a business is woman-owned, it’s a sign that there’s more to be done to achieve equality in the business world.

Jane Lehr, chair of Women’s and Gender Studies and associate professor in Ethnic Studies at Cal Poly, however, sees the benefit in differentiating between men- and women-owned businesses.

“We don’t exist in a world where there is any type of parity or equity,” Lehr said. “At the current moment we need to continue to analyze entrepreneurs by [categories] because we see huge inequalities.”

For Lehr, these categories include race, economic class, sexuality, and gender.

“The reason we are looking at it is to achieve parity,” Lehr said. “[Not distinguishing] doesn’t mean inequalities don’t exist, it just means we are blind to them.”

Reach editorial intern Rebecca Lucas through the editor at clanham@newtimesslo.com.