California experienced a double-digit increase in the number of hate crimes between 2016 and 2017, and SLO County was no exception.

The hate crime offenses were connected with nine reported hate crime incidents in 2017. One incident can include multiple offenses, according to the report. The majority of those incidents were non-violent, according to data obtained from the DOJ. Five of them involved the destruction of property or graffiti. That includes the May 2017 vandalism of Templeton High School, where unknown suspects caused thousands of dollars of damage and spray-painted racial slurs and swastikas on the schools walls. That same month Mayor Heidi Harmon reported that an unknown suspect burned a rainbow flag and slashed a yard sign promoting civil rights displayed outside her home.

Violence-related hate crimes last year included one report from the SLO Police Department involving a white suspect who reportedly used anti-African-American slurs during an assault in SLO in April, and an aggravated assault reported to by the state Department of Parks and Recreation at the Oceano Dunes in June that was reportedly motivated by anti-LGBTQ bias. 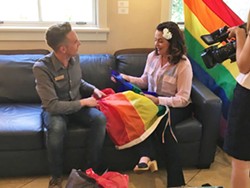 The DOJ's report also stated that a total of three hate crime cases were referred to the SLO County District Attorney's Office in 2017. The office filed all three cases, one of which has already resulted in a conviction.

SLO County isn't alone when it comes to dealing with an increase in reported hate crimes. According to the DOJ's report, hate crime incidents increased by 17.4 percent statewide between 2016 and 2017. According to the same report, 383 hate crime cases were referred to county district attorneys throughout the state, who filed 271 of them, resulting in 113 convictions at the time of the report's release. Δ