With the state's data on school and student performance in 2019 officially available to the public, several school districts in SLO County are working to address high rates of suspensions and absenteeism.

Kids who aren't in school aren't learning, according to Joseph Williams, director of student services at the Paso Robles Joint Unified School District. That's problematic at all grade levels, but especially when it comes to the younger grade-school children who are learning basic reading and math skills. 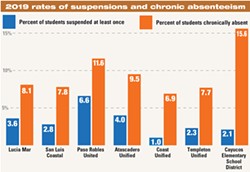 "If a kid is not at grade level by the third grade," Wiliams told New Times, "they are going to struggle."

So Paso Robles Joint Unified is taking this data seriously, he said.

The California Department of Education released its 2019 school dashboard data on December 12, 2019, and since then, schools across the state and SLO County have been assessing the newly available statistics from the 2018-19 school year. The dashboard includes rates of graduation, suspensions, chronic absenteeism, and English learner progress, along with test scores and analysis of students' college and career readiness.

While SLO County districts largely sit right around the 2019 statewide average in most categories, rates of suspensions and especially chronic absenteeism are higher than ideal. Paso had the highest rates of suspensions in the county during the 2018-19 school year, and Cayucos Elementary district had the highest rates of chronic absenteeism, with 15.6 percent of K-8 students missing 10 percent or more of expected days of attendance—a 9.9 percent increase from the previous year.

About 6.6 percent of the Paso district's 7,244 students were suspended at least once during the year, according to the 2019 dashboard, an increase of about 1.4 percent from the year prior. Of Paso's roughly 4,656 K-8 students (high school students aren't included in the chronic absenteeism data), 11.6 percent were chronically absent from school last year.

Only 3.4 percent of students statewide were suspended at least once during the 2018-19 school year, and 10 percent of California's K-8 students were considered to be chronically absent from school.

In an effort to get more students in class, Williams said Paso Joint Unified has been working with the SLO County Office of Education on improved attendance and disciplinary strategies, starting with a program called Attention2Attendance that the district launched the week of March 2.

Attention2Attendance is a software program developed and maintained by School Innovations and Achievement, which analyzes attendance data and alerts administrators and parents of warning signs to allow for early intervention. School Innovations provides technical training to school employees and mails the required absentee notifications to parents and guardians.

Williams recently heard about the software during an online truancy webinar, where administrators raved about the program and said that essentially every district in the state improving rates of absenteeism is using Attention2Attendance.

The program is expected to cost the Paso district about $30,000 a year, according to Williams, and that could be problematic considering Paso's recent short-term projections of significantly declining enrollment, which would likely lead to budget cuts. But California districts also get funding based on their average daily attendance, and Williams said that if Attention2Attendance does increase Paso's average daily attendance rates, it could pay for itself.

San Luis Coastal Unified School District, which had some of the lowest rates of suspension and chronic absenteeism in the county in 2018-19, just launched a districtwide, standardized approach to handling chronic absenteeism this fall, according to Chris Dowler, deputy director of student support services. Chronic absenteeism isn't improving as much as he'd like to see, Dowler said, but intense cold and flu seasons are largely to blame for that.

Administrators in the Lucia Mar Unified School District have been working to tackle its attendance issues for some time now, according to Assistant Superintendent of Curriculum Hillery Dixon, who presented on the district's performance in the 2019 California school dashboard at a board of education meeting on Jan. 21.

But, Dixon told New Times, "That is so much lost learning."

Like in Paso, vaping led to increased suspensions at a number of Lucia Mar's schools last year. The district is working to combat that, Dixon said, through a restorative justice kind of approach to behavioral issues on campus.

There's really no evidence to suggest that sending a student home on a suspension will change that student's bad behavior, so Dixon said Lucia Mar is working to change the way it disciplines students by focusing more on counseling, peer mediation, restorative circles, and education.

Through nationally used Positive Behavioral Interventions and Supports (PBIS) programs, students are taught how to behave, just as they're taught any other subject in the curriculum.

But it can be challenging to juggle those practices and school safety amid the increase in school shootings, and Dixon said that if a student is considered to be a threat to others, he or she will be suspended or even expelled.

Lucia Mar is still analyzing its dashboard data and finding ways to improve its rates of chronic absenteeism, especially when it comes to students in the foster system.

"The big thing is that all of our sites agree that keeping kids in school is the most important thing," Dixon said. Δ