On Oct. 12, the SLO County Board of Supervisors voted 4-1 to appoint Elaina Cano, an election's division manager with Santa Barbara County, to fill the clerk-recorder position left vacant by Tommy Gong's resignation in July. 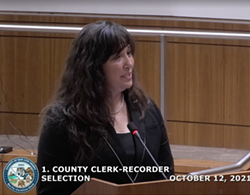 The board tapped Cano for the interim job over acting SLO County Clerk-Recorder Helen Nolan, who assumed lead duties in the department following Gong's resignation. The supervisors interviewed the two candidates in open session on Oct. 12, while a third finalist, Jeffrey Barry, the former chief deputy clerk-recorder in Yolo County, withdrew from consideration.

"This is a difficult decision," 1st District Supervisor John Peschong said at the meeting. "I think they're both highly qualified. They'd both be very, very good. I do believe that Ms. Cano is the choice."

A 16-year veteran of local election offices, Cano served as assisant clerk-recorder in SLO County before taking her current position in Santa Barbara County, which she's held since 2019.

In her comments to the Board of Supervisors, Cano said she has "the confidence, experience, and temperament to serve as your top elections official."

"SLO is my heart and soul," said Cano, a longtime SLO resident. "This is what I want to do."

Fifth District Supervisor Debbie Arnold cast the lone dissenting vote. She protested the process that led up to the board's interviews, in which a selection committee forwarded only three candidates for final interviews when the board had asked for seven.

"This is not the process we voted for," Arnold said. "I was hoping we could start over."

In passing over Nolan, who will remain a deputy clerk, 2nd District Supervisor Bruce Gibson noted that the county will now have "two extraordinary people working in our clerk's office."

Cano will head the department until January 2023, when the next elected clerk-recorder will take office.