The holidays are a great reminder to slow down and take the time to enjoy one another. It's something that Gina Perrault said she wished she did more often with her grandmother who recently died.

"I wish I would of had more time with her, but when she was alive we were very close," Perrault said. 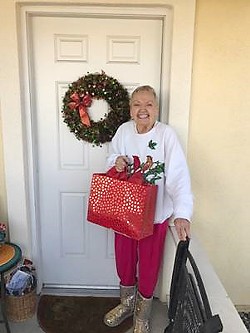 She works for Home Instead Senior Care as the business development manager and is constantly engaged with the aging community. Perrault said that the holidays can be a difficult time, as many seniors don't have loved ones to share the season with or can't commute as often to visit their families.

"When you work around the aging community, and they live longer than family and friends, their Christmas list starts dwindling down," she said. "They start retracting from society, and it could lead to depression."

Families of seniors lead busy lives and the visits can often become less frequent, so local businesses, nonprofit organizations, and volunteers are coming together to fill in that gap this holiday season.

To help bring a glimmer of hope back into their lives, Home Instead Senior Care has partnered with Peoples' Self-Help Housing, and the Senior Nutrition Program (Meals that Connect) for its 14th year of the Be a Santa to a Senior program. At participating locations, a tree is adorned with ornaments that have the names of seniors in the program. On the ornament is a wish list of items that the senior is in need of or would like.

"Some people are really specific and even write down the type of shampoo they want, and others ask for robes or blankets," Perrault said.

Some items that are really popular, she said, are adult coloring books, puzzles, and older movies like the John Wayne classics.

The gifts are brought back to the participating location or to the Home Instead Senior Care office in Grover Beach. Volunteers and staff from the organization wrap and deliver gifts to their recipients.

Perrault said last year was the first time she participated in the program.

"I helped Peoples' Self-Help Housing deliver gifts in Templeton, Atascadero, and Paso. It was such a rewarding experience," she said.

In just a year, the program has expanded its list of San Luis Obispo County seniors who are low income and in need of some holiday cheer to more than 500 individuals. In previous years the program distributed an average of between 150 and 200 gifts. The increase of participating seniors, means tree locations have increased from four to seven.

This year is an exciting one for Perrault because the program is now including the help of the Boys and Girls Club of South San Luis Obispo County.

"They will be making holiday cards to be delivered with the gifts. It's just an extra element that will make our seniors' holiday that much more special," she said.

Since the program's inception, about 60,000 volunteers have helped distribute gifts and 1.2 million gifts have been provided to seniors in need, according to Be a Santa to a Senior.

"With this program we want to make sure we're spreading a little love this season and also let these people know that they are cared for," Perrault said.

Trees will be on display Nov. 6 through Dec. 15. Gift givers have until Dec. 15 to return their gift with the ornament attached. For more information on where to pick an ornament from tree or how to get involved, visit beasantatoasenior.com or call the Home Instead Senior Care office (866) 772-3601.

Yoga Village in Arroyo Grande will offer advanced yoga teacher training beginning January 2018. The unique 300-hour training is the only of its kind on the Central Coast. Instructors will also qualify for the Yoga Alliance 500-Hour Certification. Yoga Village is now accepting registrations and a $500 deposit is required to hold a spot. For more information, visit arroyograndeyoga.com or send an email to info@arroyograndeyoga.com. Δ