A 6-year-old county policy requiring farmers with new crops over the Paso Robles Groundwater Basin to offset their water use is poised for another extension.

San Luis Obispo County officials are concerned about a looming "gap" in regulation over the 780-square-mile basin, which has struggled in recent years with development and drought.

First adopted in 2013 amid drying wells over the basin, the county offset ordinance put a theoretical moratorium on agricultural pumping. But the policy is set to expire later this year when North County leaders adopt a basin-wide sustainability plan—even though that plan could take another several years to fully take effect. 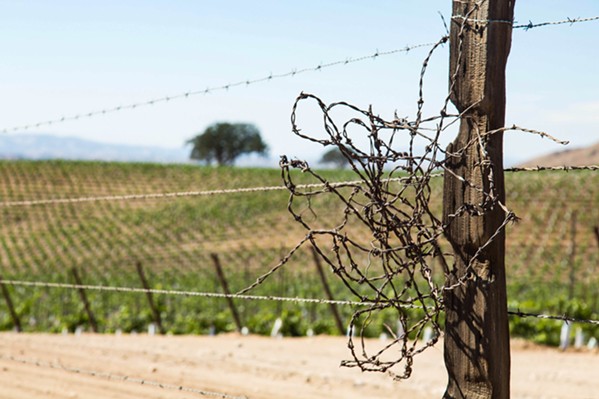 "I'm supportive of extending it until the [basin sustainability] plan is approved by the California Department of Water Resources," Peschong told New Times.

The concern is that the absence of an offset policy could invite a influx of unregulated agricultural development over the basin.

"It's the explosion of plantings [that are of concern]," Peschong said. "The big corporate guys can afford that."

Peschong said he'll be requesting some "small" revisions to the ordinance to allow more small-acreage farmers to plant without an offset. Currently, the ordinance does provide an exemption for "de minimis" crop production—which is defined as plantings that demand less than 5 acre-feet of water per year.

"It would just allow the small family farmers to be able to raise the crop," Peschong said of his hopeful changes. "They can't do anything with their land; it's hurting them economically." Δ