A traffic stop on a wanted felon in Templeton on Sept. 24 led to an exchange of gunfire between the suspect and sheriff's deputies, injuring one deputy and resulting in the death of the suspect. 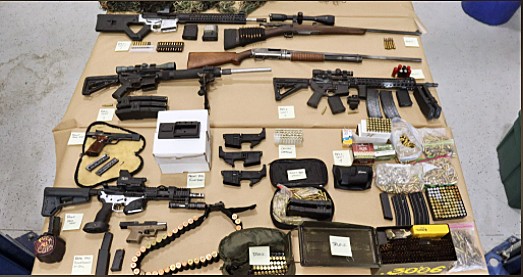 San Luis Obispo County Sheriff Ian Parkinson identified the suspect as a member of a white supremacist gang and stated at a press conference the following day that it's a gang "centered out of San Luis Obispo that we're quite familiar with."

The suspect, Christopher Straub, 38, had been booked 28 times into jails all across California, including two stints in state prison. Straub ambushed deputies after fleeing on foot from a traffic stop, fired at the deputies, and deputies returned fire. Sheriff's Office Deputy Richard "Ted" Lehnhoff, 34, sustained a leg injury during the incident.

According to the Sheriff's Office, the Sheriff's Gang Task Force was already investigating Straub when the incident occured. The task force has helped convict multiple members of the same gang who were sentenced to state prison. Sheriff's Office spokesperson Tony Cipolla told New Times that they were unable to disclose the name of the gang.

"There is a concern about disclosing the name of the gang due to gangs thriving off of notoriety, intimidation, and fear within the community. It is not the Sheriff's Office's practice to allow any gang we come in contact with to gain notoriety in order to bolster their status," Cipolla said.

The Sheriff's Office wouldn't disclose the gang's territory or how long it's been under investigation. After the incident, deputies discovered multiple guns in Straub's vehicle, and a search warrant served at his residence found that he was illegally manufacturing parts for weapons.

During the Sept. 25 press conference, Parkinson was asked whether the public should be concerned about the presence of a heavily armed white surpremacist gang operating within the county.

"Just because he's in a white surpremacist gang doesn't mean that they're targeting necessarily minorities for their crimes," Parkinson said. "They're still a gang. They're still making money conducting criminal behavior. I think any gang in the county should be of concern to the public."

Cipolla said there is a misconception about white supremacist gangs and what they do.

Gangs were born out of the necessity for protection within prisons, he said, and are generally aligned by race. These gangs have translated into criminal street gangs out of the correctional system and into the communities.

"When someone says a person is a member of a white supremacist gang, they are generally aligning on a white ideation and primarily white within the gang. However, a common theme through all gangs is the criminal enterprise they are trying to accomplish and the ability to make money," Cipolla said.

He said, from "our experience in San Luis Obispo County, the white supremist gangs do not specifically target people of color to commit crimes against."

"This is not a blanket statement, and we are not saying that white supremist gangs never commit crimes against people of color. The better way to think of this question is that white supremacist gangs are more geared around themselves and ensuring their own membership is white and consistent in their ideals."