Reports of San Luis Obispo County's rank when it comes to the most expensive gas in the country compelled its supervisors to request a pause on the state gas tax that's set to increase this summer. 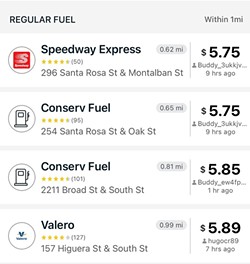 In a letter to Gov. Gavin Newsom dated April 5, signed off by Board of Supervisors Chair Bruce Gibson, county leaders asked to suspend the current 51.1 cents per gallon gas tax and its upcoming inflationary adjustment. SLO County is anticipating an average increase to 53.6 cents in July, though it would depend on the type of fuel.

"On behalf of the county Board of Supervisors, I am writing in support of your proposal to suspend the gas tax to help alleviate the cost for Californians as well as visitors to our state. The cheapest gas in our county ranges from $5.43 to $6.55 a gallon," the letter stated.

But Gibson believes the ship has sailed for gas tax suspension. He told New Times that as the second vice president of the California State Association of Counties, he and his staff are "tuned in to what's going on in the Legislature."

"The premise of the letter is incorrect. The governor is no longer proposing to suspend the gas tax so far as I know. He's switched over to trying to figure out what the Legislature has to do to in terms of direct payments to some subsets of the residents of California that might potentially be affected by this," Gibson said.

Gibson is referring to talks of gas rebates that would come from an $11 billion relief package to offshoot escalating gas prices in California as a result of the Russian invasion of Ukraine. Registered vehicle owners in the state would be eligible for at least $400 per automobile.

But not all of SLO County's supervisors agree. Fourth District Supervisor Lynn Compton proposed the letter about gas tax suspension at the March 15 meeting.

"My thought in bringing this gas tax pause to the Board of Supervisors was that I thought that the pause in the gas tax was a better proposal for our constituents who are really hurting, economically with the price of everything skyrocketing," Compton told New Times via email. "It would mean less wait time for our constituents to feel the benefit of such a proposal (it happens at the pump), as you don't have to wait for the government to write you a check as a rebate, and then the government can't say, 'The check is in the mail!' when it isn't."

At the March 15 meeting, Compton added that rebates involve "a big bureaucracy" that doesn't specify who would receive relief. Gibson echoed this in agreement to New Times but said that a hold on gas tax wouldn't result in significant change. He claimed that halting the gas tax would affect transportation and infrastructure projects that are funded through Senate Bill 1.

"There are legitimate questions as to who you would send this money to," he said. "One of the other things I tried to explain to supervisors was that if we did suspend the gas tax, there's no guarantee that the benefits of that gets into the pockets of consumers. The gas companies don't have to reduce prices. In fact, the amount of the gas tax is not large, relative to the amount of change we see month-to-month or week-to-week on gas prices. Changing or eliminating or suspending the gas tax just wouldn't be as direct a relief as direct money checks to affected individuals." Δ